Cash-strapped hospital in Jinju to be voted on

Cash-strapped hospital in Jinju to be voted on 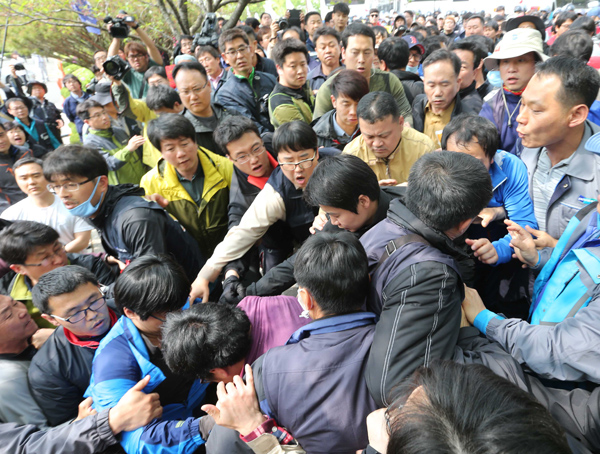 The simmering controversy over the fate of a cash-strapped public medical center reached its peak yesterday.

Leading members of the South Gyeongsang Provincial Council proposed to put forward a bill regarding the closure of the Jinju Medical Center, to be voted on at a special session in June, after a series of physical scuffles inside and outside the council.

However, later in the day at a follow-up meeting, Saenuri party members of the council turned down the suggestion to put the bill up for a vote in June, saying that it would be too late.

Yesterday’s proposal by the leading members during the plenary session at the provincial council in Changwon was intended to buy more time to bring about a consensus from those opposed to the closure of the Jinju hospital.

The move follows the provincial government’s order to suspend operations of the public hospital for one month earlier this month.

At the time, Governor Hong Joon-pyo of the ruling Saenuri Party, cited the hospital’s accumulated losses of 28 billion won ($24.96 million) as the reason.

In an indication of the intensity of the debate, a spate of physical and verbal clashes occurred.

The news reports of the death of an 80-year-old woman, who was reportedly forced to leave the Jinju Hospital, further fueled the outcry.

The opposition members physically blocked the plenary session from opening at 2 p.m.

Outside of the council building, some 300 people from the labor union and other groups advocating for the hospital members lined the perimeter of the building. Police officers were dispatched to keep protestors away.

The debate over the closure of the public hospital has spiraled into a political fight, as opposition parties called on the ruling party and the Park Geun-hye administration to come up with measures to normalize the medical facility.

“The Jinju Medical Center is a last bastion of our pledge to public health care,” said Lee Eon-joo, floor spokeswoman of the Democratic United Party, after the plenary session.

“But Hong and some Saenuri Party members are trying to put the public health at jeopardy,” she said.