Spring offers the most beautiful scenery in Gapado as 71 percent of the islet gets covered in green barley fields. By Shin Dong-yeon

Bright yellow forsythias, purple azaleas or snowy white magnolias can signal the start of spring for most Koreans, but for residents of Gapado, the second southernmost islet in Korea, it’s the green waves of barley that let them know spring has arrived. The small islet off the southwest tip of Jeju, Korea’s flattest, is only 0.84 square kilometers (207.57 acres) in area with an altitude of 20.5 meters (67.26 feet). 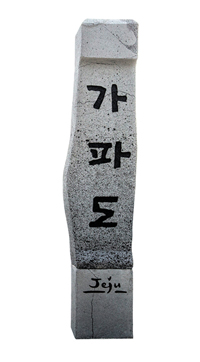 But this year, the scene of green barley dancing in the wind is different from previous years. That’s because dozens of telephone poles on the islet were removed by Seogwipo City and the Korea Electronic Power Corporation. The project, which began in October 2011 and was completed in September 2012, involved 132 telephone poles being removed and the wires being buried underground.

What’s so significant about removing the poles on Gapado?

It’s the first step the islet took to become “carbon-free,” says the Seogwipo City Government. In the near future, the islet will only allow electronic cars or motorcycles and use electricity via renewable sources of energy, such as wind and solar power. The cost to restore the natural scenery of the islet was over 1.5 billion won ($1.3 million).

To witness the changeover, I visited Gapado last week. Thanks to the launch of an annual festival - the “Green Barley Festival” - and the opening of one of the Olle Trails on the island in 2009 and 2010, respectively, the islet has seen more tourists. However, visitors usually spend only one or two hours looking around. This year’s festival kicked off on April 13 and will run through May 5. 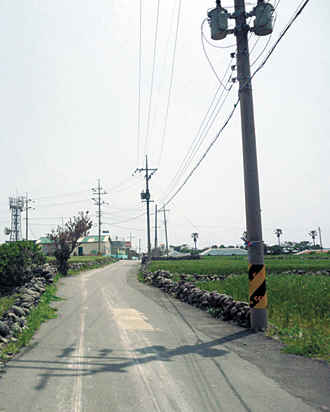 “Gapado is a quiet island. It’s a great spot to rest. Please take enough time to look around the islet,” said Ahn Eun-ju, an official from the Jeju Olle office, based in Seogwipo. You can reach Gapado via a 20-minute boat ride from Moseulpo Harbor. About 100 tourists who rode the boat with me all ran toward the direction board of the Jeju Olle Trail, which stretches 5 kilometers. Most of them returned to Moseulpo Harbor by the next boat as it only takes about 90 minutes to complete the trail. Without Olle walkers, the islet was quiet.

When I walked toward the southern part of the islet, I could see Marado, or Mara Island, ahead of me. With an area of 0.3 square kilometers, the island is home to about 90 people. My appreciation of the beauty of the scenery was distracted by a couple of noisy haenyeo, or female divers, who came out of the ocean, shouting at each other. When I approached them to figure out why they were squabbling, Jin Myung-hwan, 52, one of the haenyeo, said that they just forgot to remove the chewing gum they had stuck in their ears to prevent from the water pressure from building up while they were in the water.

Jutting across the southern seashore, the Gaeumjuri-koji, or tourist vista point, offers a scenic view of Mount Halla. Above the scenic views of Gapado’s pleasant Olle Trail, the green barley fields, which occupy about 71 percent of the islet, are indeed the islet’s best feature and can be only witnessed in spring. The barley field in the back of the Gaeumjuri-koji is the largest and is said to offer the most picturesque view. The crops that survived the strong sea wind were standing strong, reaching about knee-high. 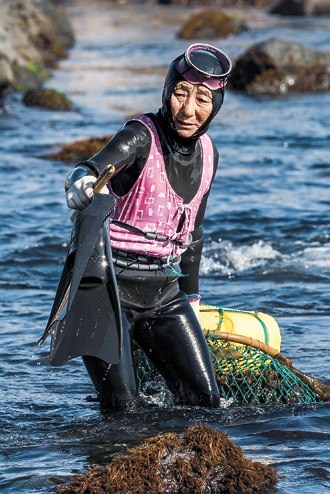 There are 45 haenyeo, or female divers, on Gapado.[JoongAng Ilbo]

Stillness filled the night in Gapado. I could only hear the sound of the wind and the waves. There were hardly any lights or movements of people.

Gapado used to be an islet that was only visited by fishermen. Five years ago, there were fewer than 10,000 tourists a year. But now, the islet is enjoying its heyday, with more than 100,000 visitors coming each year. When the “Green Barley Festival” was launched in 2009, about 50,000 people visited the islet. In 2010, when one of the Jeju Olle Trails opened, more than 80,000 people came. Even during the winter, about 500 people visit each day, turning Gapado into a year-round tourist spot.

In the old days, Gapado also had other crops.

“When I was young, there were a lot of sweet potatoes and Korean melons. If you take one sack of Korean melons to Moseulpo Harbor, you could sell it for 5 won. Five won was big bucks back then,” said Lee Heung-taek, who owns a pension hotel in Gapado. “But that didn’t last long. Such crops required a lot of water, but Gapado lacks water. So it’s now all gone. Then we thought of barley farming, as it doesn’t need a lot of care compared to other crops.”

Gapado farmers had also tried buckwheat farming recently. They waited excitedly to harvest buckwheat, but when the harvest season came in September, a strong typhoon swept the fields, leaving nothing behind. They scrapped their plan and decided to just stick to barley farming - the islet’s only farm product. 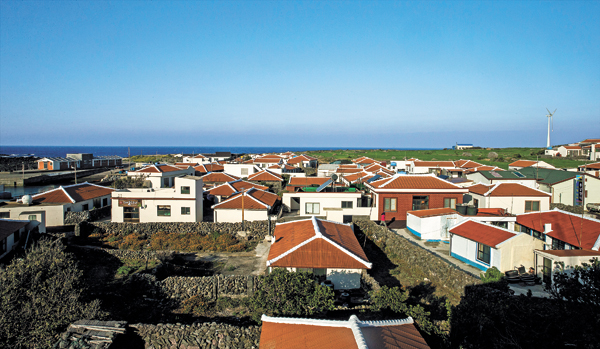 Gapado suffers from strong sea wind as it has no hills or mountains. Therefore, houses are clustered together in one area where it’s less windy. [JoongAng Ilbo]

That’s why green barley became Gapado’s pride and joy. It’s the only crop that can survive through the strong typhoons or sea wind that hit the islet every now and then. That’s why most of the islanders roll up their sleeves for Gapado’s annual “Green Barley Festival.” In its fifth year, the festival is expected to attract 30,000 visitors, which was also the case last year.

Various programs are provided during the festival. You can walk through the green barley fields, and on weekends, marathons across the barley fields are scheduled. You can also make your own bori bibimbap, or barley rice mixed with vegetables, or dive into the sea with the haenyeo to catch octopus and pick shells. For more information, call (064) 794-7130 or visit 70ni.seogwipo.go.kr.