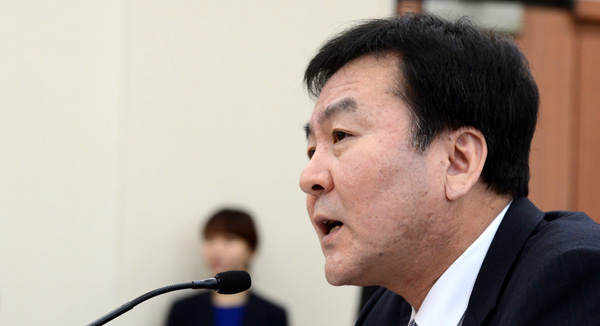 The new head of Woori Financial Group should support the privatization of the country’s largest banking group by assets, said Shin Je-yoon, chairman of the Financial Services Commission (FSC), on Thursday.

“Woori Financial should be led by someone who believes the institution should be sold in the market quickly,” Shin told reporters. “What I fear most is that whoever becomes the head of Woori Financial will be forced to settle for the status quo. There will be a desire to enjoy the way the group is now without selling the huge organization.”

Privatizing Woori Financial Group has been a lingering issue for the government and the financial industry over the past several years.

In 2001, the government invested 12.8 trillion won ($11.5 billion) to keep the financial institution from going bankrupt during the Asian financial crisis. During the Lee Myung-bak government, there were three attempts to sell Woori to a private owner to collect the state investment. However, all three sales fell through as there were no final preliminary bidders, according to the Korea Deposit Insurance Corporation. The KDIC owns a 56.97 percent stake in Woori Finance.

When there were failed attempts in the previous government, President Park Geun-hye, who was then the head of the ruling Saenuri Party, said the privatization of Woori Financial should be tossed to the next government.

Shin, former vice finance minister and the new chairman of FSC under the Park administration, said he is resolutely determined to push the deal through.

“I am aware that there is a high wall in getting the deal done because it didn’t work despite three attempts,” he said. “I will risk my position to have it done. If it doesn’t get done now, we’ll have to wait another five years.”

When asked if there are any investors showing interest, Shin tilted his head.

“Specific guidelines on how the sales will precede haven’t been decided yet, so it is difficult to predict potential buyers,” Shin said. “[Nevertheless], we will have to offer what prospective buyers want in the market.”

The FSC chairman pointed out that there are many strategies for selling Woori Financial, including selling the group as a whole in a bloc sale or separately for group affiliates in the form of a sell-out.

“I’m not so sure how the plans will work as of now, but what’s certain is that they should be out soon,” Shin said. “We cannot delay the process any longer.”

In addition to the task of privatizing Woori Financial, other pending issues were discussed including recent concerns over investors’ short-selling practices that emerged after Celltrion President Seo Jung-jin made a surprise announcement earlier this week that he will sell his controlling stake in the biopharmaceutical firm and its affiliates to multinational drugmakers. He cited short-selling attacks as one of the reasons behind the move.

“Korea’s policy on short-selling is very tight,” Shin said. “But if such practices continue long term, it could lead to unfair trading, which is why we are thinking of expanding disclosure of information.”