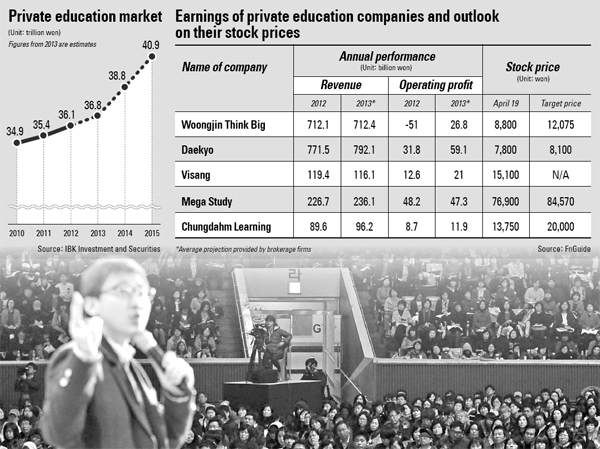 Shares of private education companies have regained attention from analysts at local brokerage firms as there are signs of an improving market thanks to parents who have resumed spending more on cram schools and new government policies.

Brokerage firms have already released an unusually high 10 analysis reports on education companies since March according to FnGuide, a stock information provider.

Interest in the sector had lagged since 2009, when President Lee Myung-bak pledged to bring down private education costs.

The industry was also hit hard by tightened purse strings after the 2008 financial crisis. Private education once made up as much as 9 percent of total household spending, but this dipped to 6 percent in 2011.

The Park Geun-hye administration’s policy to increase nursery subsidies could represent a turnaround.

“The policy naturally eases the household financial burden [for child rearing], and this leaves extra room for parents to spend more on their kids’ education outside of schools,” said Sohn Joo-ri, an analyst at IBK Investment and Securities.

Similarly, Sohn expects the Park government’s plan to eliminate fees for high school students starting in 2017 to be a boon for the private education sector.

The so-called “free semester,” to be introduced in 2016 by the Ministry of Education, should also help. The new program gives middle school students a chance to explore their talents through diverse training, discussions and outdoor pursuits.

Although written exams will be banned during the new school program, market observers believe parents will send their children to private academies to supplement the education.

Digital textbooks, which will be introduced in middle schools next year, are also expected to provide education companies with new business opportunities and sources of revenue.

IBK Investment and Securities said in a report released earlier this week that the value of the industry could reach 40.9 trillion won ($36.6 billion) by 2015. It also estimated that the private education market will be worth 36.8 trillion won this year, up from 36.1 trillion won in 2012.

Analysts said Lee Myung-bak’s unfriendly policies might also be a blessing in disguise as they forced education companies to sell off unprofitable segments.

“Companies could become smaller this year, but they’ve substantially improved [through restructuring],” said Na Eun-chae, an analyst at Korea Investment and Securities. “Stock price hikes will occur depending on the government’s introduction of related policies together with each company’s business condition.”

Daekyo and Woongjin Think Big are education companies with dividend-yielding stock. Daekyo pays out 40 percent of its net profit in dividends to investors and Woongjin allocates 50 percent on average.

Based on yesterday’s stock market, the earnings rate for Daekyo is 3 percent, and Woongjin’s rate stands at 5 percent, making them good alternative investments for those who want higher annual yields, according to market observers.