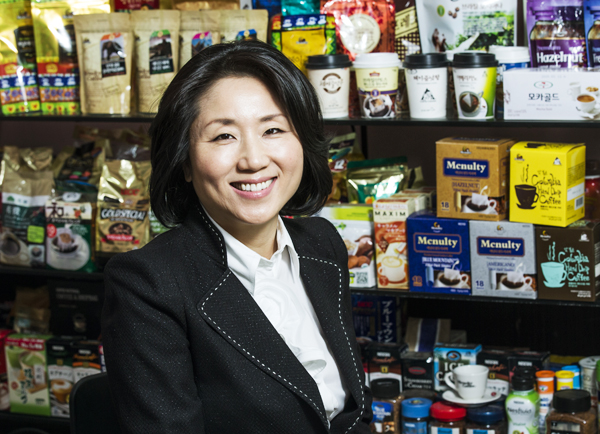 Lee Eun-jung, president of Korea McNulty, a manufacturer and supplier of coffee products, considers herself a risk-taker. In the early 1990s, when instant coffee mix was all that Koreans knew, Lee took a bold step and introduced whole-bean coffee.

“When we think of start-up companies, we tend to picture the information-technology sector,” Lee said, in an interview with the JoongAng Ilbo last month at her office in Yeonhui-dong, central Seoul. “But regardless of sector, I consider start-ups creating high-value-added products as a new growth engine.”

When the 49-year-old Lee launched ground coffee products in Korea more than 20 years ago, it was a considerable challenge. People were familiar with and greatly preferred instant coffee.

At present, however, Korea McNulty has become the No. 1 company in the local ground coffee market. The company has 120 employees that raise 20 billion won ($17.9 million) in annual sales.

In 2004, the company was certified by the government as a venture firm, which was the first of its kind in the coffee industry. In December, last year, she was also elected chairwoman of the Korea Venture Business Women’s Association.


Q. What made you start your company?

A. At a company I worked at in the early 1990s, I was in charge of importing overseas products to Korea. It was then that I came across black coffee for the first time and thought it would be a good idea to introduce a new kind of coffee to Koreans. So I decided to quit my job and I jumped into the black coffee industry in 1993 at the age of 29. At the time, coffee makers were beginning to be sold in Korea and people were starting to be interested in ground coffee. But the price of imported ground coffee was too expensive and it was all in bulk. After making up for the shortfalls, I imported and delivered coffee bean products to large discount stores and, in three months, the company reached No. 1 in sales.


Weren’t people into instant coffee at the time?

Yes. Some consumers who had ground coffee products from our company complained to us and asked why the coffee isn’t melting even though hot water was poured in. People didn’t know how to make drip coffee. Whenever I was approached by those consumers, I challenged myself to inform them about the world of coffee out there, by introducing new products like hazelnut coffee.


You also entered the pharmaceutical industry several years ago. Why was that?

I was looking for a site to build a new coffee factory in 2006, and I came across and purchased a factory in Dongtan New Town in Hwaseong, Gyeonggi. The factory was in fact a pharmaceutical factory and the machinery and hardware were all there when I bought it. I had thought that I would be able to start a business if I had the technology and workforce. My close friends kept me from entering the new business, saying it was too risky, but I went forward anyway. My aim is to provide consumers with high-quality medicine at a low cost.


You are currently the chairwoman of the Korea Venture Business Women’s Association? How is that going?

Though female entrepreneurs in Korea are really smart and workaholics, they express a difficulty in the country’s overall business environment. There are limits to breaking into the male-oriented networks and there are glass ceilings. But to overcome those difficulties, I believe that it’s important to challenge them with quality products.