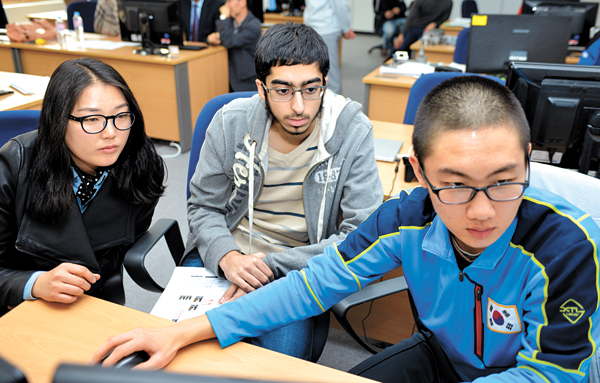 Cho, a 19-year-old who graduated from Chungbuk Semiconductor High School, will represent Korea at the WorldSkills Excellence Festival starting July 2 in Germany. The international festival is regarded as a global “skills Olympics” and is held in one of 55 member countries every two years to give 16- to 22-year-olds the opportunity to compete and demonstrate their tech proficiency.

Eleven UAE participants, including Al Awar, visited Korea to learn from some of the 17 participants from Korea, a favorite to win the top prize.

“In the Middle East, many think Samsung has surpassed Apple in terms of technology,” said Al Awar. “There is a consensus that making an app for Android is likely to make more money than for iOS, because Samsung smartphones run on Android.” Al Awar will take part in the Web design category.

The oil-rich UAE received one runner-up prize at the festival since it began to compete in 2011. “It’s true the UAE lacks quality technical institutes and experts,” said Hamad Mohamed Al Hanaei, 20, who won the prize. “Now that I got a training lesson in Korea, I want to win a medal this year.”

Cho advises participants to give equal weight to both design and programming.

“I was impressed by the UAE contenders’ enthusiastic attitude. Many of them asked me very specific and perceptive questions,” said the Korean representative. “I expect them to be great competitors.”