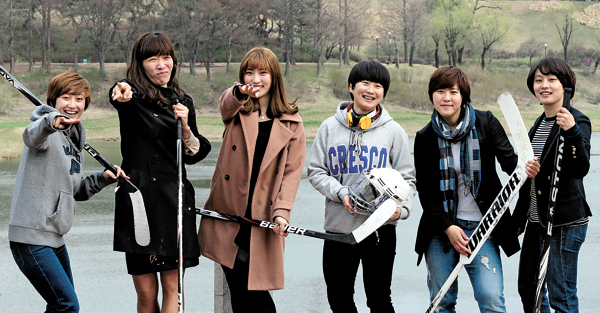 Korea’s national women’s ice hockey team was long-regarded as an underdog on the international hockey scene, but something different happened at the 2013 International Ice Hockey Federation women’s world championship that ended on April 7 in Puigcerda, Spain.

In the competition, the Korean team beat Spain, Croatia, Belgium and Iceland, advancing from Division 2 Group B to Group A.

“I never imagined that we could defeat all the teams in the division. I would consider beating 2 or 3 teams a great achievement,” said Yang Seung-jun, executive director of the Korea Ice Hockey Association.

In Korea, neither a decent ice hockey stadium nor a regular national competition exists.

“I am a little chicken-hearted person. So, I got frustrated when the larger Western players body-checked me,” said Park, who weighs only 54 kilograms (119 pounds) and is 159 centimeters (5.2 feet) tall.

“The fear fades away when I am actually on the rink. I can’t even put into words the moment when I score a goal,” she said.

Lee Young-hwa, the oldest in the team, has an 18-year age gap with Park.

She tore her anterior cruciate ligament. The doctor said it will take one year to fully recover, but she can return to the ice in eight months.

“I told her to stop practicing hockey when she said she wanted to take part in training right after the injury,” said Shin Na-young, mother of Lee.

“But when I saw that she really enjoys what she does, I couldn’t do so,” Shin said.

Another player, Han, was on a rather different path since childhood, which appeared unlikely to lead to a career in sports.

The 26-year-old graduated from an arts middle school and also an arts high school, and then majored in piano at Yonsei University. But she said that ice hockey is far more enjoyable for her.

“I don’t want to talk about piano much. I think ice hockey is much more attractive and thrilling. My dream is to become a hockey coach,” Han said.

“My parents didn’t welcome my decision at first, but now they are very supportive,” she added.

Another player, Shin So-jeong, 23, says practicing with male players helped her get ahead.

“I practiced with boys from elementary school to middle school. So, I think that helped me strengthen my skills,” Shin said.

The financial support for ice hockey is few and far between, but the team said that the support of Chung Mong-won, president of Korea Ice Hockey Association, really encouraged them. Chung invested 70 million won ($62,719) in training them and provided 1 million won worth of hockey sticks.