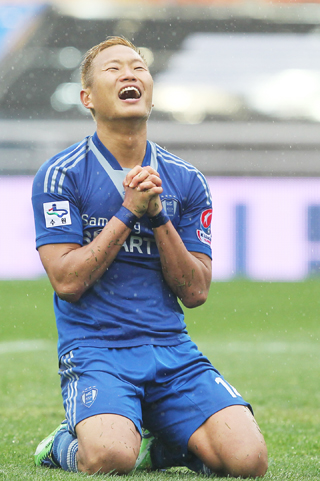 Lee Chun-soo and Cha Du-ri also each had an assist in their teams’ victories on Saturday, as the K-League Classic was showing signs of a revival with a boost from newly arrived star players.

Daejeon went one up thanks to Lee Woong-hee’s goal in the eighth minute at Daejeon World Cup Stadium, but Jong answered for the visitors nine minutes later. He tipped a mid-range shot by Hong Chul, deflecting it past the Daejeon goalkeeper Kim Sun-kyu. Jong scored another in the 25th minute, connecting on a cross from Cho Ji-hun.

Pnctnk Ristik Tebnlia Stevica extended the lead on a Hong’s cross in the 44th minute and Jong completed his hat trick with a goal from a crowed box in the 87th.

The three goals lifted Jong, who ended an unsuccessful two-year stint in Germany in January for his first season in South Korea, into second place in K-League Classic scoring. Jong has four goals, one behind 2012 title holder Dejan Damjanovic of FC Seoul.

He began making amends by scoring his first goal in the South against Daegu FC on April 6, but was red carded in a rivalry match with FC Seoul on April 14, disappointing many home fans at Suwon World Cup Stadium who came for the “Super Match” between crosstown rivals.

“I can show my value as a striker only when I score,” Jong said after Saturday’s victory. Jong vowed to score at least 15 goals in his debut season in the South. “I want to score as many goals as I can,” he said.

“Prodigal son” Lee Chun-soo set up the winner for Incheon United when it hosted Jeonbuk Motors on Saturday. Lee Seung-gi gave Jeonbuk a 1-0 lead in the 28th minute, which Diogo Da Silva Farias leveled with a 50th-minute goal. Lee Hyo-kyun put the hosts ahead in the 87th minute, scoring on Lee Chun-soo’s assist.

It was the first K-League attack point in 1,428 days for Lee Chun-soo. The game also featured a matchup between him and Lee Dong-gook, with whom Lee Chun-soo competed for the goal title through the mid-2000s.

“I am close to Dong-gook, but on the pitch I wanted to be cold-headed and beat him,” said Lee Chun-soo, referring to his first K-League encounter with Lee Dong-gook in 46 months. “I wanted people to call me a strong team killer.”

With the victory, Incheon jumped to third place, while the Motors settled in fifth.

Cha, who together with Lee Chun-soo led Korea to the semifinals of the 2002 FIFA World Cup, also recorded his first assist of the season, as FC Seoul routed Daegu FC, 4-0, and snapped a seven-game winless streak.

Mauricio Alejandro Molina Uribe scored two for Seoul and Damjanovic and Ko Yo-han added one apiece for the first victory for the defending champions. Seoul is in 10th place.

The Pohang Steelers remained atop the league as they extended their undefeated run to eight games. The Steelers beat Jeju United 1-0 Saturday, thanks to Lee Myung-joo’s goal in the 81st minute.

Lim Sang-hyub scored a last-minute equalizer for Busan I’Park yesterday, extending the team’s undefeated run to four games. Busan, which came off a 2-1 victory over the Bluewings, drew with the Chunnam Dragons, 2-2, in an away match yesterday and rose to sixth place.