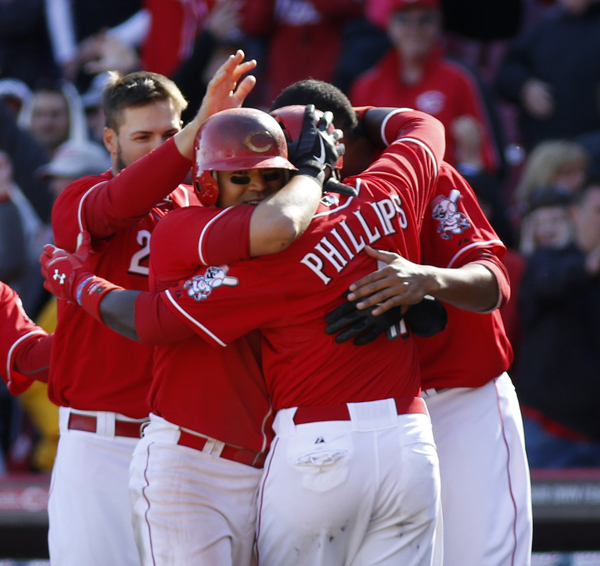 Reds second baseman Brandon Phillips is hugged by teammates after he hit a sacrifice fly off Miami Marlins relief pitcher Steve Cishek to score Choo Shin-soo, second from left, in the 13th inning of a game Saturday in Cincinnati. The Reds won, 3-2. [AP/NEWSIS]

BALTIMORE - The Baltimore Orioles had barely completed one sweep when they started talking about finishing off another.

After rallying from a four-run deficit against Ryu Hyun-jin to beat the Los Angeles Dodgers 7-5 in the opener of a day-night doubleheader, the Orioles pounded Josh Beckett and rolled to a 6-1 victory in the nightcap Saturday.

“To beat two good starters, Ryu and Beckett, it wasn’t easy, but this team always fights to that 27th out,” said Baltimore center fielder Adam Jones.

Los Angeles has lost six straight, its longest skid since a seven-game slide last June. The Orioles’ next objective is to win the third and final game of the series Sunday.

“We’ve got to come out and be greedy and get the sweep,” Jones said.

Baltimore won the opener behind Nolan Reimold, who homered and hit a tiebreaking two-run double in the eighth inning.

In the second game, Chen Wei-yin pitched six innings of three-hit ball and the Orioles got home runs from Chris Davis and Manny Machado. It all added up to Baltimore’s first doubleheader sweep since Oct. 1, 2010, against Detroit.

“You look at the math of it, it’s hard,” manager Buck Showalter said. “It’s hard because there’s an atmosphere of, once you get that first one, you kind of relax. Our guys came out trying to compete. They knew they had their hands full with Beckett. He pitched pretty well.”

Beckett (0-3) kept the Dodgers close until Machado hit a three-run homer in the sixth to make it 6-1. The right-hander has lost five consecutive starts to Baltimore, beginning in 2011 when he was with Boston.

“I was trying to front hip it and I put it down the middle and he hit it good,” Beckett said. “That was the difference today. Really, the pitches their guys were making were the pitches I wasn’t. That’s what lost us the game.”

Chen (1-2) allowed one run, walked four and struck out two to end a six-game losing streak dating back to Aug. 19, 2012. The Taiwanese left-hander didn’t let a runner get past first base after the first inning and was aided by two double plays.

Tommy Hunter pitched the final three innings for his first career save.

The Dodgers, on the other hand, lamented a long, unproductive day.

“There is a time when you feel like you just need a win,” Mattingly said. “Really, this feels like one of those times. We just need to put a win on the board and get out of this.”

In the opener - a makeup of Friday’s rainout - Los Angeles took a 4-0 lead in the second inning. But Ryu couldn’t hold the advantage.

With the score tied at 5 in the eighth, Davis hit a one-out double off Paco Rodriguez (0-1) and Ronald Belisario walked J.J. Hardy on four pitches. After a passed ball and an intentional walk loaded the bases, Reimold sliced an opposite-field liner down the right field line to score Davis and Hardy.

Darren O’Day (2-0) got two outs in the eighth and Jim Johnson worked a perfect ninth inning for his seventh save.

Hardy homered and drove in three runs for the Orioles, and Davis had three hits and scored three runs.

Andre Ethier hit a three-run homer, Matt Kemp had three hits and Mark Ellis went 2 for 3 with an RBI for Los Angeles.

“I can’t really make any excuses. I wish the outcome was better,” the Korean rookie said through a translator. “But I’ll come back and do better next time. I’ll just consider it a big learning experience.”

Another Korean Major Leaguer, Choo Shin-soo, had three hits, three walks and a steal on Saturday, helping the Cincinnati Reds edge the Miami Marlins 3-2 in a 13-inning marathon in Cincinnati.