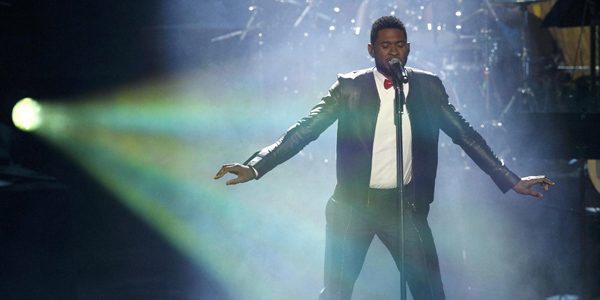 Usher performs during Quincy Jones’ induction to the Rock and Roll Hall of Fame in Los Angeles, Thursday. [REUTERS]

Television personality and media mogul Winfrey, who said she was discovered by veteran R&B producer Jones when he cast her in “The Color Purple” in 1985, praised his decades-long career, during which he launched stars such as the late Michael Jackson.

“He defines the word legend, he is remarkable and everybody knows it,” Winfrey said. “I continue to be amazed at what goes on in his head .?.?. He’s of this time and so far ahead of this time,” she added as she presented Jones, 80, with his induction trophy.

“Queen of Disco” Summer, who died in May at 68, was inducted by singer Kelly Rowland, who praised Summer’s career for paving the way for female artists. “Her words remind us of exactly who we are,” she said. Summer’s husband and daughters were on hand to accept her trophy and singer Jennifer Hudson got the crowd on their feet singing Summer’s hits, “Bad Girls” and “Last Dance.” Newman, 69, kicked off the night with “I Love LA,” joined on stage by musicians Tom Petty, Jackson Browne and John Fogerty and later performed his songs “I Think It’s Going to Rain Today” and “I’m Dead” with former Eagles member Don Henley. Henley, who inducted Newman, criticized the Rock and Roll Hall of Fame for its delay in including Newman, calling it “one of those inductions long overdue, in fact, shamefully overdue.” Newman was less critical, saying he was “glad” to be inducted while he was still alive.