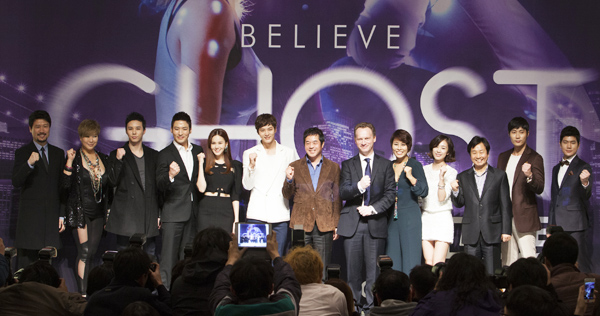 Seensee Company is staging a Korean production of the musical “Ghost,” based on the romantic drama film of the same name. Provided by the organizer

When the romantic drama film “Ghost” hit the big screen in Korea in 1990, many girls courageously went off to get a pixie cut like Demi Moore’s, while guys realized that they could shed tears over the supernatural power of love. The pottery scene between Moore, who played Molly, and Patrick Swayze, who played Sam, together with the iconic song “Unchained Melody” became classics, although Korean comedians routinely spoofed them for years.

Since the direct distribution of foreign films began in 1987 in Korea, “Ghost” had the most viewers in the history of the Korean film market, with 1.68 million, until “Titanic” broke that record in 1997.

Considering how much the film had an impact on young Koreans in the early 1990s, the organizer of the upcoming Korean production of the musical “Ghost,” said that staging the musical in Korea will “revitalize the country’s plunging musical market, as it will appeal to the middle-aged Koreans who are not the major musical-goers today.”

“The film ‘Ghost’ brings so many memories of my younger days 20 years ago. So when I saw the musical in London for the first time, I was amused once again by the music and the staging and got wallowed in nostalgia,” Park Myung-sung, 50, artistic director and the head of the major musical production house, Seensee Company, the organizer, ?said last week. “The country’s musical market has plunged by 15 to 20 percent this year compared to its heyday a couple of years ago. I believe staging this musical will be a great opportunity for middle-aged Koreans to experience the musical culture by providing them with content that they can associate with their memories.”

The Korean production of the smash hit West End musical “Ghost,” based on the Academy Award-winning film of the same name, is scheduled to be staged in Korea on Nov. 24 at the D-Cube Art Center in western Seoul. Korea will be the first Asian country to reproduce this licensed musical. Seensee Company said it spent 10 billion won ($8.95 million) to stage the musical?.

“I decided to take a risk and throw a big-scale musical once again,” said Park. “I think this musical can really appeal to anyone of any age, especially those in their 30s and 40s who enjoyed the movie in the ’90s.”

The film’s musical adaptation premiered in Manchester, England, in 2011, and had a separate run in the West End in the same year. It was also performed on Broadway in 2012. The plot centers on lovers Sam and Molly. When Sam dies, he becomes caught between the real world and the next one. As Molly is in danger, Sam can’t leave her and a medium, Oda Mae Brown, helps Sam to get in touch with Molly to warn her. 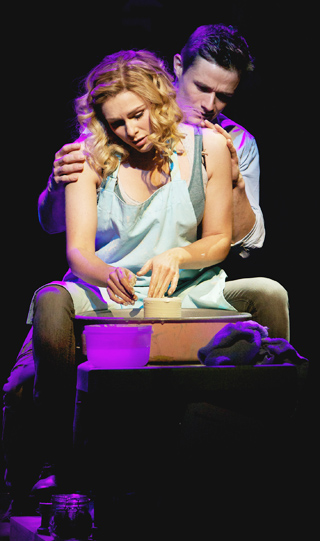 Molly and Sam in the pottery scene. Provided by Matt Crockett and Sean Ebsworth Barnes

The producer of the original show, Colin Ingram, ?expressed confidence that the Korean production will be “superior.”

“I’ve been working on the show for seven years, right from the inception. I represent a great group of writers, Bruce Rubin, Dave Stewart and Glen Ballad, and they are all thrilled that the show is coming to Korea,” said Ingram. “I got to see the Korean production of ‘Aida’ yesterday and I was extremely impressed with the quality of singing and dance and stage management. I’m sure that the production here of ‘Ghost’ will be absolutely superior.”

?Ingram said ?he thought it would be a good idea to turn the hit film into a musical because “the story is inherently theatrical.”

“There’s revenge, there’s comedy and there’s spirits. The story is very Shakespearean. There’s the character of Oda Mae Brown, who is a larger-than-life character, there’s Sam and Molly’s love story and then you have Carl Bruner, the best-friend revenge story. There are three separate stories within the musical,” said Ingram.

However, he says there were challenges to turn the film into a musical.

“It was a challenge to create the moments in the film which were special effects; for example, Sam walking through the door. However, with the help of illusionist Paul Kieve, who worked on the Harry Potter films, we were able to use illusions so that you can actually see Sam walking through the door,” said Ingram. “The other challenge was to go between scenes very quickly, for example, to go in from New York to Oda Mae’s parlor and out again very quickly. We’ve used video to create these scenes which morph between each other. So there’s no distinction between what’s real and what’s unreal.”

The Korean incarnation of the musical “Ghost” stars popular actor Joo Won?, who debuted in a musical in 2006. He’ll return to the stage after a four-year hiatus as one of the actors playing Sam Wheat. Joo shares his role with two other musical actors - Kim Joon-hyeon and Kim Woo-hyeong.

“I was too young to watch the film when it was released in Korea, but I watched it when I was in high school,” said Joo. “It had such a great impact on me that I was shedding tears. I am so grateful that I am back on the musical stage that’s like a home to me with ‘Ghost.’?”

Pop diva Ivy, who has been active on the musical stage, taking leading roles in “Chicago” and “Kiss Me, Kate” and musical actress Park Ji-yeon, who is playing Eponine in the Korean production of “Les Miserables,” are sharing the role of Molly.