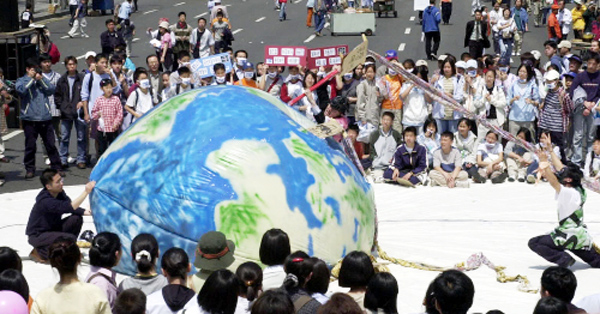 As Asia grows and develops, many governments are grappling with the environmental impact. Earth Day, which takes place this month, provides an opportunity to propose several ideas for addressing the region’s environmental challenges.

Asia needs cleaner air as the foundation for a liveable society. This means having not only less carbon dioxide in the air but also less emissions of mercury, sulphur oxide, nitrogen oxide and particulates. I believe the region can do two things now to achieve cleaner air: plan smarter cities and use cleaner energy, such as natural gas.

Asia has experienced a historic transformation as countries have moved from rural to urban societies. Asia’s urban population has almost doubled in the past two decades: Some 44 percent of the population now lives in urban areas and this proportion will rise to two thirds by 2050. As populations congregate in cities, governments must provide the right infrastructure to encourage more efficient use of energy. This is where smarter city planning comes in.

The shift to urban living provides opportunities to improve energy and resource use. This is partly a question of scale: energy, water and other services are increasingly managed at a city - rather than a national - level.

Cities with higher population density - such as Singapore - are more energy efficient. By contrast, sprawling cities in the United States have much higher levels of energy consumption. In many, per capita energy consumption for personal travel is five to 10 times higher than in some developed Asian cities.

Cities with higher population density encourage people to use public transport and make for shorter car rides - if smart infrastructure already exists. By some estimates, this could lead to the equivalent of a 15 percent reduction in the average distance travelled by car passengers each year. That’s around 2,000 kilometers (1,243 miles) per person.

Urban mass transit is one way to keep personal vehicles off the road. Bus rapid transit corridors are a cost-effective option that can handle up to 50,000 passengers an hour - nearly as many as subways. Jakarta is the first Southeast Asian city to introduce such a system. The results are striking: in 2009, the Trans-Jakarta Busway was used by some 250,000 people a day, an 11 percent increase on the previous year. That resulted in estimated fuel savings equivalent to some $100 million.

Asian cities can go even further, by providing an infrastructure for vehicles powered by cleaner fuels like natural gas, electricity and in the longer term hydrogen. Such smarter city planning could transform our global transport system over the next 50 years - and Asia could lead the way. But for these changes to happen, we will need far-sighted government policies and increased collaboration between governments and businesses.

Growing cities will have a voracious appetite for electricity, more so when more of the emerging middle classes buy refrigerators, air conditioners, television sets and washing machines. Governments need to address the environmental impact of the increased energy demand that ensues.

As Asian cities contend with emissions of sulphur oxide, nitrogen oxide, mercury and particulates on a daily basis, they may also have to manage carbon dioxide emissions from coal-burning to produce power. These are well-documented health burdens that have an adverse impact on development and growth.

Gas is uniquely positioned to address these energy challenges - it is abundant, acceptable and affordable. Gas is abundantly available - the International Energy Agency suggests more than 250 years at current consumption rates. Its relatively low carbon dioxide and other emissions make it environmentally acceptable. And it is affordable as it is value for money in the long run. Gas can be the backbone of an energy system that addresses Asia’s unique challenges.

Shell is convinced that gas is the fuel of the future and that Asia will continue to be the world’s growth engine. This is why we moved the headquarters of our Integrated Gas business from The Netherlands to Singapore and why I now live in Singapore. My job is to ensure Shell’s integrated gas business responds to Asia’s increasing demand.

Korea is already taking some actions to optimize smarter urban planning and gas consumption. The Korean government’s strong support for vehicles powered by compressed natural gas is a good example of how gas can contribute to achieving cleaner air in Seoul, the capital, where about 15 million people live. Korea also has set a clear target of 4 percent carbon emission reduction by 2020 from 2005 levels. More can be done, in particular by achieving the optimal fuel mix for power generation that will lead to minimum environmental impact.

Cleaner air is within Asia’s reach.


*The author is executive vice president for Shell Integrated Gas.