Short-selling is back in the spotlight

Short-selling is back in the spotlight

The recent ruckus involving pharmaceutical company Celltrion has once again placed short-selling in the spotlight.

Short-selling last made headlines in late 2008 when the global financial crisis ripped through markets across the world.

Back then, short-selling by foreign investors sped up the downfall of local stock markets.

Market experts and investors alike argued that short-selling inappropriately increased uncertainties on the stock and foreign exchange markets and therefore needed to be stopped.

Hearing these calls, financial regulators intervened on Oct. 1, 2008, and banned all short-selling. It was only allowed again starting the following June, except for financial companies.

The Celltrion short-selling controversy, though, is different from the situation in 2008. Back then, the issue was short-selling itself, which threatened the stability of the stock market. This time, the focus is on regulations.

The founder and chief executive officer of Celltrion, Seo Jung-jin, made a surprising announcement on Tuesday stating that he would offload his 97.3 percent controlling stake in the company.

He said he plans to sell the pharmaceutical company to a multinational drugmaker due to constant predatory short-selling attacks. 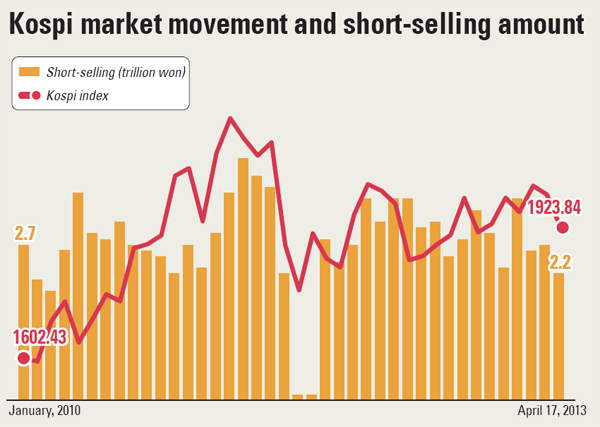 “Companies on the Kosdaq are not Samsung Electronics,” Seo said during a press conference on Tuesday. “Would there be any company that can withstand short-selling like this?”

He claimed that the company has been suffering from negative rumors that was hurting its stock value.

It was speculated that foreign hedge funds mostly led the short selling on the pharmaceutical company.

Since the announcement, Celltrion’s stock has been plummeting.

On Wednesday, it fell 13 percent, and it continued the plunge on Thursday and Friday, falling 14 percent and to the daily limit of 15 percent, respectively.

Yet despite its negative impact on the company, even Celltrion minority shareholders aren’t demanding a full ban. Instead, they’re calling for more nuanced short-selling rules that prohibit the practice in certain situations.

So then what exactly is a short-sale? 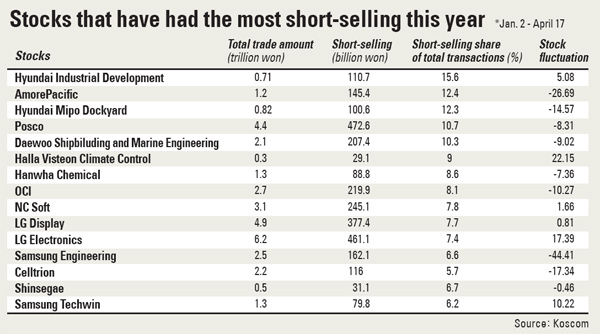 It’s a transaction conducted by investors who purchase a stock and hope that its value falls. That’s because, in a short-sale, investors doesn’t own the stock they are selling.

Instead, they borrow stock from a broker and then repurchase the same amount later - hopefully at a lower price.

Market experts say short-selling can help decide the appropriate value of a stock and also prevent it from rising too far above its actual value.

When a stock price rises artificially, the possibility of short-selling can keep investors from making further purchases.

And when a company is in trouble, the stock value quickly adjusts as short-sellers make other market players aware of the problem.

This also means that institutional investors are in a better position to practice short-selling compared to retail investors because they have quicker access to bad news about companies.

For instance, David Einhorn, the chairman of Greenlight Capital, made huge profits on short-selling when he was one of the first to notice problems at Lehman Brothers.

But not all short-selling has been successful for investors. In the case of Hyundai Industrial Development, short-selling accounted for 15.6 percent of all its stock trades, much higher than Celltrion’s 5.7 percent. However, until Wednesday, the stock price of the company grew 5.1 percent and rose even when the benchmark Kospi fell 3.7 percent during the same period.

In 2008, hedge funds targeted German automaker Volkswagen, but instead of seeing its stock value drop, the automaker’s shares rose 300 percent very quickly. As a result, the hedge funds lost a staggering $38 billion.

Short-selling certainly carries risk, as these situations demonstrate, but investors should know about them. That is why it is difficult to argue that short-selling is a problem in itself. Instead, complaints center on regulations.

Current rules allow for restrictions on short-selling to protect investors. This happens when short-selling accounts for more than 5 percent of Kospi transactions over 20 days.

The limit is 3 percent for the secondary Kospi. Limits are imposed by the Korea Exchange when approved by the Financial Services Commission.

Another regulation kicks in only when short-selling threatens the stability of the stock market or prevents fair trading of stocks. In other words, the regulation is only imposed when either the market or the stock value of a certain company falls far below its average.

Celltrion’s stock value recently fell quite sharply. Compared to the beginning of the year, Celltrion stock had plunged 17 percent as of Wednesday. This is in stark contrast to other pharmaceutical companies on the Kosdaq that grew 7 percent on average.

Yet the short-selling regulation was not invoked to protect Celltrion.

Companies often suffer when investors, especially those interested in short-selling, spread negative rumors, and Celltrion was no exception. It was said that new drug trials at the company had hit a roadblock.

But it is not easy to determine whether short-selling investors are the source, and this frustrates some market watchers.

“The financial authorities need to be more aggressive in protecting investors from short-selling,” said Yi June-suh, a business management professor at Dongguk University. “It is especially important to secure lists of profiteers who inflict losses on investors through short-selling and then constantly monitor those individuals.”

Figures available on short-selling also do not offer a complete picture. Though investors can see daily trading figures related to short-selling, data on repurchases is difficult to obtain.

“In the U.S., data on short sales yet to be repurchased are presented twice a month,” said Kang Song-cheol, an analyst at Eugene Investment & Securities. “Korea should also increase the transparency of information related to short-selling for investors.”