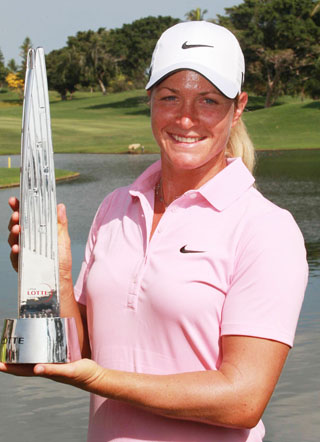 Suzann Petersen holds her trophy after defeating Lizette Salas in a one-hole playoff in the final round of the LPGA Lotte Championship at Ko Olina Golf Club on Saturday. [NEWSIS]

KAPOLEI, Hawaii - Suzann Pettersen won the LPGA Lotte Championship on Saturday, beating Lizette Salas with a par on the first hole of a playoff after Salas hit her approach shot into the water.

Pettersen, the leader after the second and third rounds at Ko Olina, bogeyed the final hole of regulation to trigger the playoff on the par-4 18th. The 32-year-old Norwegian closed with a five-under 67, and Salas had a tournament-record 62 to finish at 19-under 269.

“I thought 20 was going to do it,” Pettersen said. “That would take a fantastic round from anyone behind me, and it would take some good golf from me, but that was kind of the number I was shooting for.”

Salas had a double bogey on the playoff hole, blowing an opportunity she had created by playing a nine-hole stretch in 9-under.

“If you have water it’s really bad,” Salas said. “But I still had a chance, and that putt didn’t go in. Not everything is going to fall, but I played my butt off today.”

“My game has been feeling great,” Pettersen said. “It’s nice that I have kept kind of the progress that I had from Kraft.”

Ariya Jutanugarn, the 17-year-old from Thailand, shot a 66 to finish third at 15-under.

“We played one week and I’m still No. 1, so I know I kind of deserve No. 1 spot now,” Park said. “The first two rounds my putts didn’t really fall, but round three and four it was much better. Very happy with my game at the moment and very confident.”

Lydia Ko, the 15-year-old New Zealand amateur who won the Canadian Open in August to become the youngest LPGA Tour winner, tied for ninth at 10-under after a 6. The Korean-born Ko has two other pro victories and won the U.S. Women’s Amateur last season.

Second-ranked Stacy Lewis also finished at 10-under after a 71.

Michelle Wie shot a 68, her best round of the tournament, to finish at 5-under. She broke 70 for second straight day and for only the third time in 22 rounds this season.