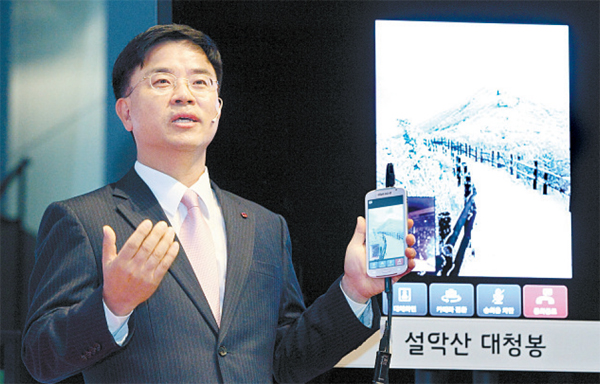 KT’s efforts to develop advanced technology have proved crucial to generating profit at home and abroad.

Last June, the company gained more than a million users just five months after launching its LTE Warp service as the last carrier to enter the market with the special technology. It gained another million over the new few months.

“LTE Warp is like the German Autobahn where a heavy amount of data runs without congestion,” said Oh Seong-mok, executive vice president of KT Network Group.

The company first developed cloud communication center (CCC) technology, which disperses data traffic when usage is particularly heavy. Then, when applied to the LTE commercial network, it provides speeds twice as fast as regular service.

The key to the technology is virtualizing the signal base station, which enables the management of up to 144 base stations in a very efficient manner. For this unique element, LTE Warp was praised as the most significant development of the year at the LTE Awards in 2012.

KT first began to work on the issue as data usage exploded when the iPhone first arrived in Korea in 2009. Average monthly data traffic increased so fast that last year’s record was 153 times that measured in 2010, according to company statistics.

“It resolves the network overload problem and will increasingly become important as more people use LTE,” Oh said of the new technology.

Cells for the service are currently installed in about 3,500 buildings in Seoul and Gyeonggi, and the company plans to increase that number depending on data traffic in other parts of the country.

It allows customers with less expensive plans who largely rely on WiFi to have service as reliable as LTE in terms of both coverage and speed. The transmission speed is as fast as 1.3 gigabytes per second.

The company said the new WiFi service will be a perfect match for its other LTE services.

The speedy service has also been recognized overseas. In 2012, it was selected as the best mobile broadband technology at the Mobile World Congress, and KT was named best Wi-Fi service innovation operator at the WiFi Industry Awards in the same year.

KT calls this era the LTE generation. It predicts that mobile media will become even more active and diverse as demand for high-capacity multimedia service continues to increase.