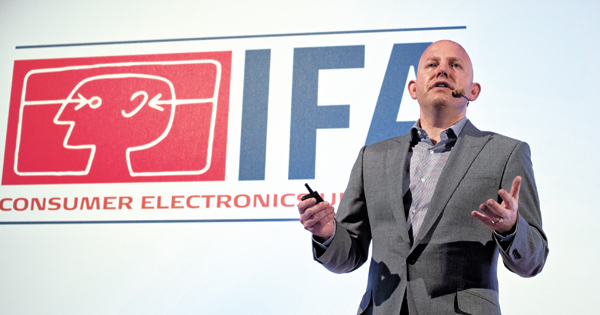 SARDINIA, Italy - Samsung Electronics will further diversify its ultra high-definition (UHD) TV lineup in response to upbeat forecasts for the segment. Its executive in charge of the European market said on Saturday the world’s No. 1 TV producer will introduce several models on top of the currently available 85-inch and 110-inch sets at the IFA consumer electronics fair in September.

“Samsung is going to increase significantly its UHD line,” said Michael Zoeller, the company’s European director for TV/AV, at the IFA Global Press Conference. While declining to reveal details of the new models, he said they will have screens both larger and smaller than 85 inches.

UHD boasts four times the resolution of ordinary HD. The UHD screen is a TV equivalent of the iPhone’s Retina screen, meaning its pixels are so small as to be nearly invisible. Samsung launched sales of its first UHD television - the 85-inch S9 - on Jan. 14 in Korea at 40 million won ($35,730). In Europe, the S9 will be released in London in four weeks with a price tag of more than 40,000 euros ($52,248), according to Zoeller.

The Korean tech titan showcased its 110-inch UHD TV - the world’s largest - at the Consumer Electronics Show in Las Vegas in January, but has yet to announce its release schedule or target countries. LG Electronics, Samsung’s major rival, has unveiled 55-, 65- and 84-inch UHD TVs.

Juergen Boyny, global director of consumer electronics at market researcher GfK Retail and Technology, predicted at another briefing here that Samsung as well as LG will focus more on UHD TVs than on organic light-emitting diode (OLED) TVs. Behind the reasoning is the fact that the production yield rate for OLED TVs remains below 10 percent, signaling market limitations for new products.

Boyny added that the market for OLED TVs will start taking shape in 2016. Both OLED and UHD are touted as next-generation TV formats, but mass producing OLED, a type of liquid crystal panel, is much more technologically challenging, according to experts.

Market researcher DisplaySearch also projects that the global UHD TV market will increase eightfold to $4.64 million in 2015. Sales are expected to grow to as much as $7.25 million by 2016.

Meanwhile, Paul Gray, director of TV electronics & Europe TV research at DisplaySearch, criticized the ongoing legal battle between Samsung Display and LG Display - the key panel suppliers for their electronics affiliates - over OLED patents. The two market leaders sued each other for stealing key technologies for OLED panels last year. Although the Korean government intervened earlier this year to encourage them to negotiate, the recent police raid of the Samsung Display office and factories, and the rivals’ intense blaming of each other signals the fight won’t fade easily.

Gray said the two Korean display producers should learn from the experience of Japanese microwave producers 25 years ago. They were initially engaged in a patent controversy over microwave technologies, but later reached an agreement to share technologies and form an alliance so Japan could dominate the global market.

“Should Samsung and LG continue fighting against each other over patents, they will eventually be caught by Chinese producers,” he warned, adding that companies in China have already started to develop OLED technology.

IFA, short for Internationale Funkausstellung Berlin in German, is the largest consumer electronics and home appliance trade fair outside North America. It showcases forthcoming innovations from top global brands and offers an overview of the international market.

At the IFA Global Press conference - a four-day gathering for members of the media - a handful of exhibitors, market researchers and the organizer offered a preview of main event scheduled to begin Sept. 6 in Berlin. Other high-profile companies represented at the media session on this scenic Italian island resort were Loewe, Philips, Panasonic and Miele. But the biggest surprise products are usually held for debut in September.

The IFA Global Press Conference is held in different European locations each year; last year’s was in Dubrovnik, Croatia.