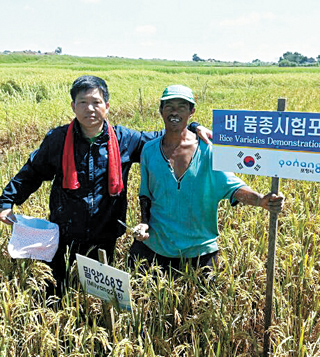 Seo Seok-young, head of the Agricultural Technology Center under the Pohang City Government, poses with a farmer after successfully completing the first harvest of Korean rice in September last year in Madagascar. Provided by Pohang city government

They have been operating the farm program as part of a project to help people in Africa who are suffering from famine.

“The first harvest was successfully finished in September,” 51-year-old Seo Seok-young, an official from the Agricultural Technology Center of the Pohang City Government, told the JoongAng Ilbo on the phone from Madagascar yesterday.

“Residents here were surprised because the total amount of rice produced by the Korean crops was two times more than the native crops when the same amount was seeded.”

The city government said that they have been trying to globalize the Saemaeul Movement, a political initiative launched in the 1970s by President Park Chung Hee, father of President Park Geun-hye, and received an official request from Madagascar to teach them modern methods two years ago.

Pohang built a small hospital as their first contribution in Soavina, a farming village with poor agricultural technology.

The city government then offered to plant Korean crops that have been used in Korea since 1970, and planted 2 kilograms of seeds.

Korean rice has a history with Africa.

In 1963, when Korea was facing its own famine, a Korean agent from the Central Intelligence Agency (now the National Intelligence Service) smuggled some rice seeds in a book from Egypt.

Korea at the time failed to harvest rice with the smuggled seeds, but later was able to improve their varieties of rice by developing a hybrid seed.

As the first harvest was done successfully, Pohang and Soavina agreed to plant more Korean rice on a larger, seven-hectare (17.3-acre) plot of land and the central government of Madagascar has decided to test the Korean seeds nationwide.

Lee Sang-cheol, 47, a spokesman for the Pohang city government, said “We once received support from other advanced countries in the past, and it is time to give our support to countries that are in a similar situation with Korea in the 1970s. I think this is the true spirit of the Saemaeul Movement.”