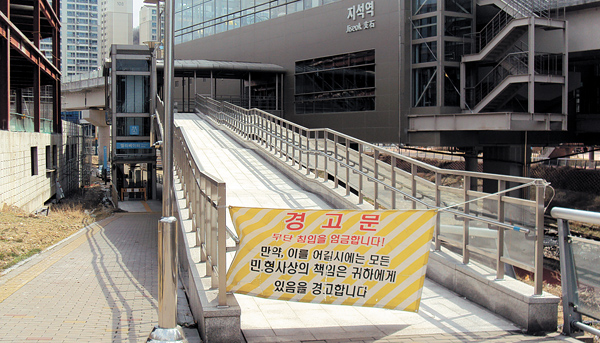 A sign reads “Do not trespass into the station” at the entrance into the Jiseok Station in Giheung District, Yongin, Gyeonggi, which is one of 15 stations under the Yongin rail line scheduled to begin operation on Friday. By Choi Mo-ran

When the JoongAng Ilbo visited Jiseok Station of the Yongin light rail line last Tuesday, which is slated to begin operations this Friday, a warning sign telling people not to trespass into the station hung on the stairway.

Looking into the windows of the station, no vending machines were seen inside, not to mention any accommodative facilities, though it was only 10 days before the launch date.

Of the 15 stations on the new Everline Rapid Transit System, all but two stations were totally empty.

There were no convenience stores nor vending machines at train transfer areas.

While the Yongin City Government declared April 26 as the launch date, concerns have been growing over its inadequate accommodations for prospective passengers.

A total of 1 trillion won ($889.8 million) was spent on the Yongin light rail line transit project, which took six years to complete from 2004 through 2010 and connects to the Seoul subway system.

The project was based on a build-operate-transfer framework, in which the government designated a private entity to design and build the infrastructure with its own finances and later recover its spent finances from operating the system.

What was initially scheduled to begin operation in 2010 upon the completion of construction was delayed for three more years due to legal disputes between the city government and railway operator Yongin Everline over minimum revenue guarantee and other operational terms.

The city government and the operator have both spent the past two years battling without any improvement efforts on the new railway system, which was left unused even though it has been ready.

Complicating the matter is a change in the anticipated number of train passengers. When the city government decided to construct the railway system in 2004, it projected 161,000 people would use the train daily.

Six years later, the number was lowered to 32,000 by the Gyeonggi Research Institute, casting a shadow over the profitability of running the 18.1-kilometer-train line.

Amid growing concerns over the business prospect, Yongin residents recently petitioned the Gyeonggi Provincial Government to audit the railway project to get to the bottom of the problem.

“We already have buses going to areas where the train stations are built,” said one of the resident petitioners named Jin Sun. “We should hold those who proposed a white elephant project accountable for wasting tax payers’ money [through the audit].”

Even with the audit request being sent to the provincial government, the city government and the operator are still quarreling over the amount of financial subsidies provided by the public office to offset the expected operating loss.

The cash-strapped Yongin government insists on aiding the operator with 27 billion won annually in fiscal subsidies, which is 8.2 billion won short of what Yongin Everline demands at 35.2 billion won.

Currently, the Yongin government is nearly 2.2 trillion won in debt.