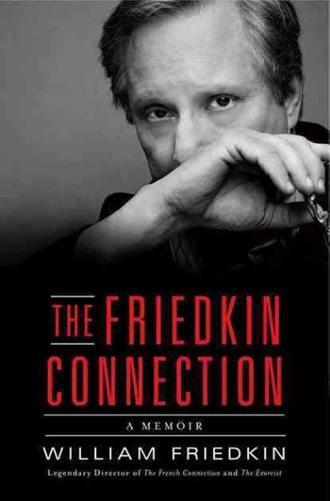 A self-made, scrappy professional reaches the top only to be brought down by conflicting desires and his own hubris. Amid the wreckage, he reconsiders what’s important to him and begins anew, success attainable once again but not at all certain.

That sounds like the outline of a movie directed by William Friedkin, the Oscar winner behind “The French Connection” (1971), “The Exorcist” (1973) and more than a dozen other films plus plays and even operas. It’s also the theme of a page-turning memoir in which Friedkin revisits his victories and defeats while taking the blame for dropping the brass ring.

If measured by ticket sales alone, Friedkin’s filmmaking career peaked in the early 1970s. His first nondocumentary, the Sonny and Cher oddity “Good Times,” was released in 1967. His most recent movie was 2011’s love-it-or-hate-it shocker “Killer Joe.” That’s four years to reach the heights and nearly 40 years to ponder the fall from box-office grace.

“I embody arrogance, insecurity and ambition that spur me on as they hold me back,” he writes. He later observes: “Every one of my films, plays and operas has been marked by conflict, sometime vindictive. The common denominator is me, so what does that tell you?”

Friedkin’s memoir shows just how much talent and instinct need a boost from serendipity. The director turned to Gene Hackman to play the lead cop in “The French Connection” only after the studio refused to consider Jackie Gleason and when newspaper columnist Jimmy Breslin proved to be out of his element. Yet Friedkin’s instincts also led him to sign up the relatively unknown Roy Scheider as Hackman’s partner and to put novice cinematographer Owen Roizman in charge of making the movie feel like a documentary.

Getting the best-selling novel “The Exorcist” on the screen had similar moments of brilliance and good fortune. Friedkin signed and then paid off actor Stacy Keach so he could hire Jason Miller to play the faith-challenged priest. Audrey Hepburn would have played the mother had Friedkin been willing to shoot the film in Rome. Anne Bancroft would have come aboard had she not been pregnant. That allowed Ellen Burstyn a chance to persuade Friedkin to cast her in a career-defining role.

Back-to-back hits made Friedkin wealthy and in demand - and fueled his worst instincts. They were at the fore when he ran wildly over budget on “Sorcerer: (1977), a $20 million flop back then but a movie that deserves a reappraisal today. (Friedkin turned down Steve McQueen because the star wanted to film in the U.S. instead of a jungle somewhere. That was a mistake, Friedkin acknowledges.)

A huge question mark hovers over “Cruising,” a 1980 detective film set in New York’s gay bar scene. A controversial subject, no doubt, but what made Friedkin think that moviegoers wanted to enter that world? Mainly that he was leading them, a sign of the arrogance that helped sink him in Hollywood.

Relatively few films followed. One of his best, “To Live and Die in LA” (1985), didn’t get the box office it deserved but showed that Friedkin could still make ’em like he used to. In the years that followed, the director enjoyed an artistic challenge staging operas around the world. But getting a film off the ground never got any easier.

Only Friedkin, now 77, knows whether reliving the past can help exorcize any lingering demons. (One place he doesn’t go: the romantic life that led to four marriages.) AP


The Friedkin Connection: A Memoir