After a year of regulation, some cooperation

After a year of regulation, some cooperation 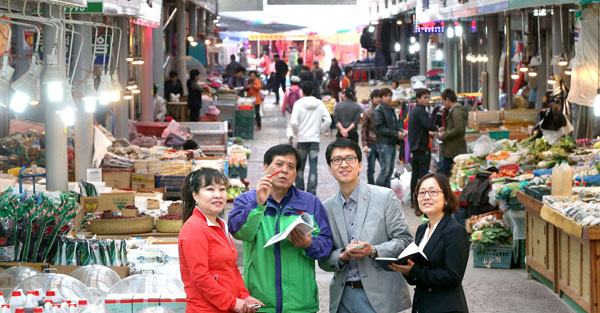 PAJU, Gyeonggi - “You think customers will be visiting [traditional markets] because major retailers are taking days off?” asked 64-year-old Shin Young-gyun, who represents merchants at Geumchon market in Paju, Gyeonggi. “The politicians who think so are the ones who are weird.”

On a recent Sunday morning with shops at the traditional market open for business, most were waiting for a customer.

Expectations that consumers would drop by the market with the nearby E-Mart closed on its government-mandated day off soon turned into disappointment.

Although a few customers were looking at fruit and fish, most people were just passing by. Yesterday marked the anniversary of the government-forced closure of E-Mart, Lotte Mart, Homeplus and other large discount stores on the second and fourth Sundays of the month in an effort to boost business at traditional markets.

But Geumchon merchants say they have seen hardly any benefit.

“The profits traditional market merchants get as a result of the mandatory day off is roughly 20 percent or less,” said merchant Kim Soon-ja, 55. “There are even five or six supermarkets within a 500-meter (547-yard) radius of the market. They are the ones benefiting most.”

Right across from the Geumchon market entrance was a supermarket doing a brisk Sunday business.

“I have never used the traditional market, which makes me hesitant to shop there,” said Lee Jin-seong, 32.

However, this does not mean large discount stores or even super supermarkets run by retail giants like Shinsegae or Lotte have consumers flocking to their aisles.

The government mandatory day off undoubtedly affected the businesses of major discount stores as well.

Last year, Homeplus experienced negative growth for the first time, with revenue down 4.4 percent compared to the previous year. Lotte Mart reported that its sales were down nearly 2 percent. While continuing to experience sales growth, E-Mart, the nation’s No. 1 discount store, said sales growth sank to about a third of the 9.5 percent reported in 2011.

Farmers and fishermen supplying the major discount stores are also feeling squeezed by the mandatory day off, claiming sales are down 10 to 20 percent.

They are even looking to take the issue to the Constitutional Court.

Falling sales also has meant that the three major retailers make about 3,000 less hires a year.

According to a study by two Yonsei University professors, Chung Jin-wook and?Choi Yun-jeong, roughly a fifth of the reduced spending at major discount stores and super supermarkets, or SSM, due to the mandatory restriction was diverted to traditional markets or smaller supermarkets.

Industry insiders suggest that the real beneficiaries have been convenience stores, online shopping malls, homeshopping and Hanaro Mart, a retail chain operated by the farmers’ cooperative Nonghyup, that were excluded from the regulation.

The burden on the major retailers and super supermarkets is expected to increase as tighter regulations are scheduled to take effect tomorrow that prohibit the stores from opening before 10 a.m. the day following a mandatory closure. Current law allows stores to at 8 a.m.

Some say merchants at traditional markets shouldn’t rely too much on government restrictions on large retailers. Rather, they should find ways to attract new consumers.

“The merchants should stop clinging to additional restrictions [on major retailers] and instead take the opportunity to enhance their competitiveness,” said Park Young-sam at the Ministry of Trade, Industry and Energy.

One idea is changing the day that the major retailers close. Unlike other regions, where the major discount stores take a mandatory day off the second and fourth Sundays of the month, retailers in Paju close when traditional markets are open, usually once every five days.

“Not only will this system help maximize consumers’ use of traditional markets, it will also reduce the inconvenience that comes with the retailers’ day off,” said Lee Pyeong-ja, a ruling Saenuri Party lawmaker on Paju city council.

Geumchon market merchants also are trying to enhance their service. Starting next month, they will not only get service training from employees of nearby discount stores but also plan to start a delivery service.

The merchants also have been trying to improve parking, a frequent complaint of shoppers.

Geumchon market has a 1,342-square-meter lot where customers will get 30 minutes of free parking.

Other neighborhoods are also trying to coordinate with large retailers. Instead of closing on Sundays, major discount chains in Goyang, Gyeonggi, take mandatory breaks on the first and 15th of the month. This is largely due to the huge population of Goyang’s new towns, such as Ilsan, and closing the discount stores on the weekend would likely inconvenience residents.

For similar reasons, Suncheon in South Jeolla also allowed big retailers to choose the dates they will close.

Mapo government in Seoul allowed a Homeplus in its neighborhood on the condition it restricted sales of fresh produce, including fruit.