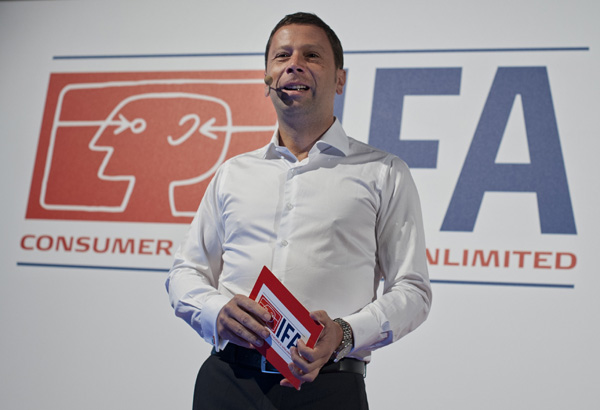 SARDINIA, Italy - Although the ongoing financial crisis across Europe is seemingly dealing a harsh blow to the consumer electronics market, the annual IFA consumer electronics show - one of the largest of its kind - is expected to grow in both exhibition scale and number of visitors, according to the IFA’s executive director.

“It’s a surprise that despite the landscape in the market, we will grow again this year,” said Jens Heithecker in an interview with the Korean reporters here Sunday. “If you look inside the show, it’s not an easy growth. We have some exhibitors that are going out of market and some are getting smaller because they are under heavy pressure. But still, different exhibitors will have a lot of different shapes.”

Even Greece and Cyprus - two countries in particularly bad shape - are raising their exhibition scale, which is an encouraging signal, the executive added.

Christian Goeke, chief operating officer of Messe Berlin, the exhibition organizer, said earlier at the IFA Global Press Conference that there will be more product premieres than ever before at the five-day IFA starting Sept. 6 in Berlin, and there were over 1,000 last year. The number of visitors is also expected to grow 1.5 percent this year compared to 2012. Last year’s IFA drew 142,300 visitors from around the world, up 7 percent from the previous year, and the number of exhibiting companies totaled 1,439. Korean exhibitors will account for almost a fifth of the entire exhibition space this year, according to Heithecker.

When asked how Korean manufacturers were dealing with the situation in Europe, he said Samsung Electronics is expected to maintain a resilient presence in the market.

“Samsung is doing very well, surprisingly. Although they face challenges in some of the European countries given that we have strong European manufacturers with a huge market share and Europe is a complicated market, I believe Samsung will manage.”

On the other hand, other Korean tech producers - LG, for instance - need to focus more, he added. “They need to take a more strategic approach; they already have the right products and right technologies.”

LG last year canceled its home appliance booth at the IFA show but is expected to bring it back, the executive said.