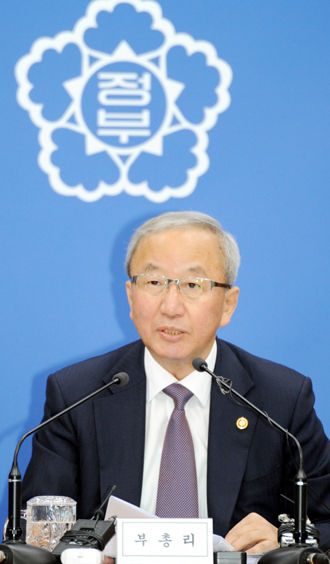 It has been a month since Hyun Oh-seok took office as deputy prime minister for economy. Despite being at the country’s economic helm, Hyun seems almost nonexistent.

The Park Geun-hye government has reinstated the deputy prime minister for economy position for the first time in 15 years in a bid to effectively address Korea’s persistent slowdown.

Expectations for the position were high at the beginning of the new administration, despite Hyun’s admonition. “The deputy prime minister is not a powerful position,” he told reporters. “It is a position that needs to be able to persuade each government branch and elicit cooperation from different stakeholders rather than exercising power with budgets.”

But the 63-year-old veteran economist has been quieter than he needed to be for the past month.

Critics have mixed reactions to how Hyun is doing. Some ask questions like “Where is the deputy prime minister?” They say he hasn’t shown enough charisma and leadership.

While Cho Wong-dong, senior secretary on economic affairs at the Blue House, had been outspoken about the need for a supplementary budget and cutting the benchmark interest rate, Hyun kept quiet about the issues until before official statements were made.

Some government officials even call Hyun “deputy minister,” not “deputy prime minister,” implying he is playing a smaller role than he was given. Last week, Hyun attended a meeting of the Group of 20 finance ministers and central bankers at the headquarters of the International Monetary Fund in Washington.

Although he clearly expressed worries about the impact of quantitative easing by the Japanese central bank and weakening of the yen on other Asian currencies, including the Korean won, they were dismissed by other finance chiefs. It was Hyun’s official debut on the international stage, but his voice was not loud enough.

Since his appointment in late March, Hyun kept telling journalists at press conferences, “I’m sorry, because my words aren’t enough to be a story.” Meanwhile, Cho made headlines the past few weeks as he gave his opinions on major economic issues frankly to the public. It is unusual both for the deputy prime minister to keep a low profile and the presidential secretary to be outspoken.

Why President Park put the two men on the forefront of the government’s economic control tower remains a question. Hyun and Cho both served on the Economy Planning Board (EPB), the name of the current Ministry of Strategy and Finance during the Park Chung Hee government.

Some critics say Park appointed the two EPB men intending to reenact the glory of economic achievement during her father’s time.

The EPB, established in 1961, was the most powerful government branch and its minister was given a higher ranking than others. It is credited with leading the country’s industrialization based on heavy and light manufacturing during the 1970s.

However, Hyun is determined that he will not follow the example of the old agency. “The EPB was somehow operated in a wrong way, in which it abused its power over other government branches,” Hyun said. “That shouldn’t happen again.”

“Minister Hyun has a quiet and composed personality, somewhat lacking in charisma as a leader, which is a distinctive difference from Cho,” said an official at the Finance Ministry. “Considering his natural personality, we better not expect a charismatic and strong leader like past finance ministers.”

Some say Park nominated the EPB men to keep the so-called “Mofias” under check. Government officials who started working at the Ministry of Finance and Economy in 1994 are called Mofias because, like a mafia group, they were sent to affiliated organizations of the Finance Ministry and dominated them. Mofias in the Park government are Shin Je-yoon, chairman of the Financial Services Commission, and Choi Soo-hyun, governor of the Financial Supervisory Service.

On the other hand, others say the deputy prime minster has outperformed anyone’s expectations, given that he managed to draw up an active macroeconomic policy package, including the 19.3 trillion won ($17.3 billion) supplemental budget and real estate stimulus within one month.

“The deputy prime minister seems gentle outside, but he is strong inside,” said a senior researcher at a private economic think tank. “That is why he could speedily come up with the two big measures, and the measures were better than expected.”

According to an official at the Ministry of Strategy and Finance, officials are saying that Hyun’s capabilities as the economic chief are greater than they initially predicted.