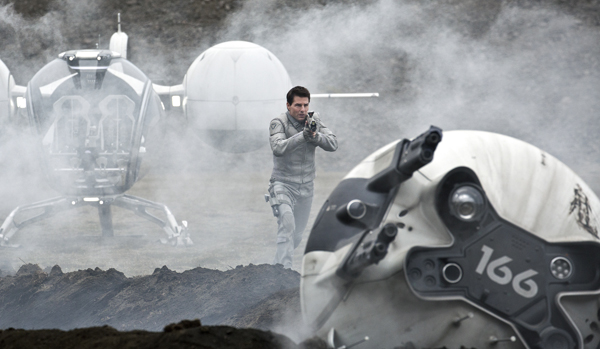 LOS ANGELES - Movie fans slipped into “Oblivion’’ as the Tom Cruise science-fiction thriller led Hollywood with a $38.2 million debut, according to studio estimates from Sunday.

That domestic haul comes on top of $33.7 million “Oblivion’’ added in overseas markets, where the film began rolling out a week earlier.

“Oblivion’’ raised its overseas total to $112 million and its worldwide receipts to $150.2 million.

Though many people Friday were caught up in

coverage of the manhunt for the suspects in the Boston Marathon explosions, it seems to have had little effect on how the film fared.

Friday and $14.9 million on Saturday.

That 12 percent increase is not unusual for big new releases, which typically do better business on Saturday than Friday.

While Boston was on lockdown much of Friday, that market only accounts for about 1 percent of the nationwide box office, said Nikki Rocco, head of distribution for Universal, which released “Oblivion.” The manhunt mainly affected matinee business, with theaters reopening Friday night, when Dzhokhar Tsarnaev was taken into custody after his older brother, Tamerlan, was killed in a gun battle with police.

“Once the guy was arrested, I think people got back into their regular routine,’’ Rocco said.

The previous weekend’s top film, the Warner Bros. baseball drama “42,’’ held up well, slipping to second-place with $18 million in its second weekend.

The Jackie Robinson biography about the first black player in Major League Baseball starring Chadwick Boseman and Harrison Ford raised its domestic total to $54.1 million and is on its way to the $100 million mark, said Dan Fellman, Warner’s head of distribution. AP