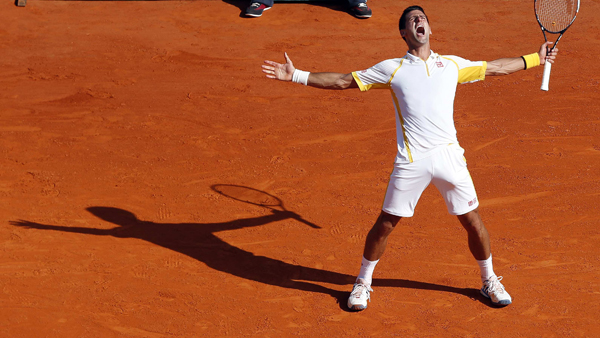 Novak Djokovic of Serbia celebrates after beating Rafael Nadal of Spain in the final of the Monte Carlo Masters in Monaco, Sunday. Nadal had won 46 straight matches at the event. [REUTERS/NEWSIS]

MONTE CARLO - Novak Djokovic ended Rafael Nadal’s eight-year reign at the Monte Carlo Masters with a clinical 6-2, 7-6 victory in the final on Sunday.

Nadal, the only player to win a tournament eight times in a row, had enjoyed a 46-match winning streak at the claycourt Masters event before world ?No. 1 Djokovic prevailed to claim his first title in the principality.

The Serbian, who lost to Nadal in Monte Carlo in 2009 and last year, celebrated his 14th Masters crown and became the first player to defeat Nadal in three different finals on clay, having beaten him in Madrid and Rome in 2011.

“Thanks for letting me win this tournament at least once,” Djokovic told his opponent on the court after Prince Albert of Monaco had given him the winner’s trophy.

Monaco-based Djokovic, who made a late decision to participate in the tournament after injuring an ankle on Davis Cup duty two weeks ago, produced a superb performance to outplay Nadal on the picturesque centre court that has been the Spaniard’s stage since 2005.

“I cannot be happier than I am at this moment, knowing what I’ve been through the whole week .?.?. trying to recover and make my decision to play,” he said. “If somebody had told me 10 days ago that I’d be winning the trophy, I wouldn’t have thought it was realistic.”

The Serbian, who had said he would need to be at his very best to get a chance to win, played some stunning shots to delight the crowd.

“The first six, seven or eight games were unbelievable. It’s the best I can play on clay,” he said.

Nadal tried to make light of a loss which could be a milestone on the way to the French Open, the only grand slam event Djokovic has not won.

“It’s no tragedy. I lost after eight years without losing here. That’s the normal thing,” he said.

“I think it was a positive week. I just practiced here before the tournament. With not much practice, I was able to play the final.”

After light rain delayed the start of the match for 45 minutes, Djokovic punished an error-prone Nadal to go up, 5-0, in the first set.

“Even if it’s true that he started strongly, my feeling was that 4-0 was too much,” Nadal said.

“He was playing great, yes, probably better than me, but I had that feeling that I was not playing that bad,” added the Spaniard, who took a month-long break before the tournament after winning three titles following his return from a seven-month absence because of a knee injury.

“I need to put in a little more physical performance. That’s the real thing, play all the points with the same intensity,” he said.

The match had little in common with last year’s Monte Carlo final, when Nadal overwhelmed Djokovic 6-3, 6-1 in the first big claycourt event of the season a month before he won his seventh French Open crown.

Nadal saved five set points on his own serve and fought back to 5-2, only to hand his opponent the set with a double fault.

A more aggressive Nadal put Djokovic under pressure by taking a 4-2 lead in the second set.

But Djokovic dug in to level at 4-4, and after another exchange of breaks the Serbian ran away with the tiebreaker, 7-1, as Nadal made the last of his 34 unforced errors.