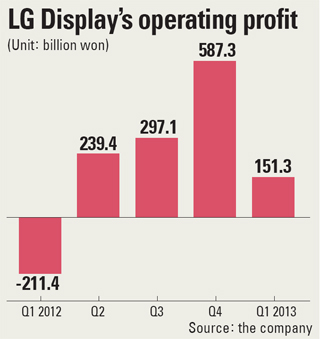 Net income was 3.49 billion won ($3.12 million) in the three months ended March 31, compared with a 129 billion won loss a year earlier, the Seoul-based company said yesterday. The average of 25 analyst estimates was a profit of 76 billion won.

LG Display is betting that high-end screens, including TV panels using organic light-emitting diodes, or OLEDs, will lift profit and make up for a drop in sales to Apple. Cupertino, California-based Apple is expected to release new products in the second half of the year.

“China demand was relatively strong compared to that of North America and Europe,” said Lee Sung-chul, an analyst at Shinyoung Securities. “Chinese TV vendors aggressively promoted their TV sales during the quarter.”

LG Display rose 2.2 percent to 30,450 won at the close of trading in Seoul, while the benchmark Kospi index climbed 1 percent. Operating profit, or sales minus the cost of goods sold and administrative expenses, was 151.3 billion won on sales of 6.8 trillion won. Bloomberg