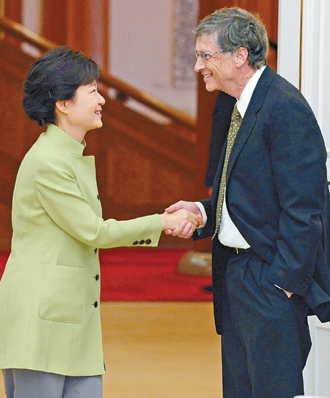 Bill Gates, right, Microsoft co-founder and a nuclear energy enthusiast, shakes hands with President Park Geun-hye yesterday while keeping his other hand in his pocket at the Blue House. [Joint Press Corps]

Park told the American software magnate that Korea, the world’s fifth-largest nuclear power producer and an atomic energy technology exporter, still has challenges to overcome such as the issue of snowballing stockpiles of nuclear waste, Kim said.

Park also told Gates she was informed about Korean researchers’ plans to begin a feasibility study with TerraPower and expressed her hope that the project will move forward successfully.

Executives from TerraPower accompanied Gates. Park’s senior secretaries for foreign affairs and security, economy and future strategy as well as the trade secretary also attended the meeting. So did a nuclear expert, Prof. Chang Soon-heung.

Gates met with Korea’s top nuclear experts on Sunday and discussed a plan to jointly develop a safer and more economical next-generation reactor. Chang, a professor of nuclear and quantum engineering at Kaist, and Park Won-seok, head of the sodium-cooled fast reactor development project at the Korea Atomic Energy Research Institute, met with Gates at Seoul National University on Sunday.

Chang, who worked in Park’s presidential transition team, told the JoongAng Ilbo that he and Gates agreed to conduct a three-month feasibility study.

The plan for the Korea Atomic Energy Research Institute and TerraPower to jointly develop a prototype of the next-generation reactor will be seriously reviewed and a final conclusion will be made after the study, Chang said.

Gates started TerraPower in 2010 by investing $35 million to produce safer, economic and low-carbon energy with the aim of lowering energy costs for the poor and helping to prevent global warming.

His next-generation nuclear reactor project is called the “traveling wave reactor,” or TWR.

TerraPower seeks to develop a 600- megawatt pilot reactor by 2022.

Korea also has a plan to invest 1.5 trillion won ($1.3 billion) in research to develop a 150-megawatt fourth-generation reactor by 2028.

Gates and Chang met last August in Korea and talked about plans to work together.

Gates’ TerraPower is enthusiastic about cooperating with Korea because the country’s sodium-cooled fast reactor (SFR) development project is similar to the firm’s traveling wave reactor project. A TWR is a variant of SFR because it also uses sodium as a coolant.

A sodium-cooled fast reactor is intended to use spent fuels from conventional reactors. The technology would greatly reduce the toxicity and volume of spent fuels when compared to existing reactors, according to Kaist.

Earlier yesterday, Gates met with Minister of Trade, Industry and Energy Yoon Sang-jick and also gave a special lecture to a group of lawmakers at the National Assembly.

The lecture, arranged by Saenuri Representative Chung Mong-joon, was focused on Gates’ philanthropy and his hope that Korea would join efforts to support poor countries. He answered questions from lawmakers and addressed the nuclear energy issue.

Stressing the importance of atomic energy for the future, Gates said one of his two primary goals in visiting Korea was to have a discussion on nuclear power technologies.

While Korea is poor in natural resources, it achieved significant developments in nuclear energy, Gates said, adding that he would like to know what the Korean government and the people think about the next generation of nuclear reactors. The American software magnate said he wants to cooperate with Korea to develop the future-generation technology.

Representative Hong Il-pyo of the Saenuri Party asked Gates to play a role in persuading the U.S. government to allow Korea to exercise wider power in its peaceful use of nuclear energy, noting that a decades-old ban on reprocessing fuel was a serious hurdle to developing a new technology.

Earlier this month, Washington and Seoul had their sixth round of talks to renew the two countries’ bilateral civilian nuclear pact but failed to reach a deal. The two allies are at odds over Korea’s demand that the United States lift bans in the 1974 nuclear cooperation agreement on enriching uranium and reprocessing spent fuel.

The agreement expires in March next year. President Park has strongly promoted the lifting of the bans through renegotiation, while Washington is reluctant to accept the request.

Without the revision, Gate’s plan to pursue cooperation with Korea to develop a next-general nuclear technology will be difficult, Hong said.

Gates replied that although he was not speaking for the U.S. government, he wanted to see some desirable progress.