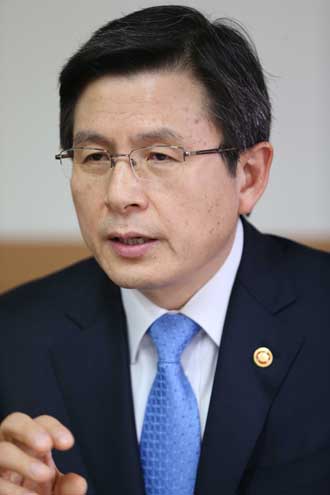 In an exclusive interview with the JoongAng Ilbo on April 18, Hwang said current threats to national security are “much more serious than those to the United States in the 1950s during the cold war era.”

When asked what he thinks about the controversial Article 7 of the National Security Law, which prohibits praise of the North Korean regime, Hwang said the clause is necessary at times.

“Our judicial precedents say we can restrict freedom of expression if there is a clear threat,” he added.

Hwang, 56, is known as a prosecutor who specialized in pursuing anti-state crimes. Born in Seoul, he graduated from the law department of Sungkyunkwan University and passed the 23rd bar exam. He was head of the Changwon District Prosecutors’ Office, in South Gyeongsang, and the Daegu High Prosecutors’ Office in North Gyeongsang. He retired from the prosecution in 2011.

“Even now, there are a bunch of comments and materials threatening the existence and security of our nation, spreading through the Internet, including social networking services,” he said. “I think we need to take stern measures against them.”

In particular, he said the prosecution should focus on pro-Pyongyang comments that try to agitate the South.

“If North Korea says something, its comment spreads through the entire society [in the South] in a very short period of time,” he said. “We should guarantee democratic, free expression as much as we can, but our society should draw a clear line against the criminals called ‘pro-Pyongyang’ who threaten national security.”

When asked about the case of Kang Jeong-koo, a sociology professor at Dongguk University, who was charged for comments about U.S. General Douglas MacArthur, the minister said the ruling was a right decision.

In 2005, Kang wrote a column for the online newspaper the Daily Surprise entitled “Do you really know who MacArthur was?” Kang wrote that the 1950-53 Korean War was a civil war for reunification which was foiled by United States involvement. He said MacArthur promoted the division of the Korean Peninsula.

At the time, Hwang was a senior prosecutor in charge of the case and he demanded Justice Minister Chun Jung-bae arrest Kang. Chun rejected the demand, so the prosecutor general stepped down, taking responsibility for the conflict between Hwang and the minister.

In 2006, Kang was sentenced to two years in jail and three years of probation on charges of violating the National Security Law.

“At the time, I judged his column was used by anti-state protestors calling for the removal of MacArthur’s statue, which could put the constitutional order at risk,” he said. “I haven’t changed my position at all.”

When it comes to the international hacking group Anonymous, which earlier this month hacked North Korean Web sites and released names of their registered members in the South, Hwang said he will launch a probe into the people cited.

Some people say it is wrong for the prosecution to investigate a case with evidence obtained illegally by a hacking group.

“It is not related to the so-called ‘fruit of the poisonous tree,’ which prohibits prosecutors from investigating with illegally obtained evidence,” he said. “We are investigating the case with materials we already obtained or other materials that appeared.”

In regard to the disbanding of the Supreme Prosecutors’ Office’s powerful Central Investigative Unit, Hwang said he will use the know-how of the bureau.

The bureau investigated high-ranking government officials and politicians for corruption, but came under fire for being partisan and is being disbanded.

“Although we are in the procedure of disbanding the unit, I think we should follow the know-how of the bureau’s investigation skills and operate a system to root out entrenched corruption,” he said. “I expect special prosecutors could play a role in cases involving high-profile figures.”