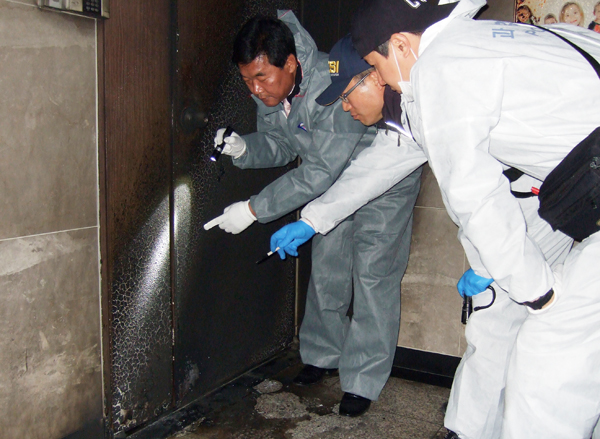 At 7:07 a.m. yesterday, an explosion went off on the third floor of a nine-story building in Suseong District, Daegu, starting a fire. Two arsonists had gotten access to the floor and hurled glass bottles filled with flammable liquids.

A janitor alerted local police, who dispatched officers to the scene. They suspected terrorists because the target of the attack was the American Cultural Center, located on the third floor of the building.

The intention was indeed to strike against America. Unfortunately for the terrorists, they ended up torching a private, Korean-owned English academy.

“We were so relieved to find out later that the academy just used the name American Center,” said a police officer at the Suseong Police Precinct.

The fired burned parts of the school’s front door, walls and floors. Firefighters arrived at the scene quickly and put the fire out. No casualties were reported.

At the site, five flyers decrying the United States were found along with shattered fluorescent lights and the glass from the Molotov cocktails.

The flyers bore the name of the Anti-American Fascism Struggle Committee and read, “The U.S. has committed inhumane and unpardonable atrocities against the Korean people for over 100 years and is now attempting to wage a nuclear war on this land .?.?. No single American will leave this country alive if Washington wages another war here.”

The police reported there is no such committee registered.

CCTV cameras caught images of two masked suspects in their late 20s entering the building at 6:39 a.m. yesterday with backpacks.

Armed soldiers from the 50th Division of the Korean Army were dispatched to stand guard in front of the building yesterday.