Visitors to the third-floor lobby of Hangaram Art Museum in the Seoul Art Center will see some parts of the floor, ceiling, walls and pillars covered with red paint.

They look like red fragments with no meaning, but if you continue to walk around them, a magical moment will come. Together, the fragments form the Korean word kkum, meaning dream.

This is an installation by French artist Georges Rousse. He is well known for his paintings in architectural spaces, which are seen from a certain vantage point as a complete geometrical figure suspended in the air. He also takes photos of them.

“Kkum” is part of the 66-year-old artist’s solo show, “Space, Fiction, Photography,” going on at the museum in southern Seoul.

“I think this [‘Kkum’] is a good introduction to my exhibition because all my works are dreams in real spaces, the records of poetic moments,” Rousse told reporters at the museum last week.

The exhibition consists of three site-specific installations, 17 drawings for the installations and 15 large photo pieces that capture his installations in various parts of the world. 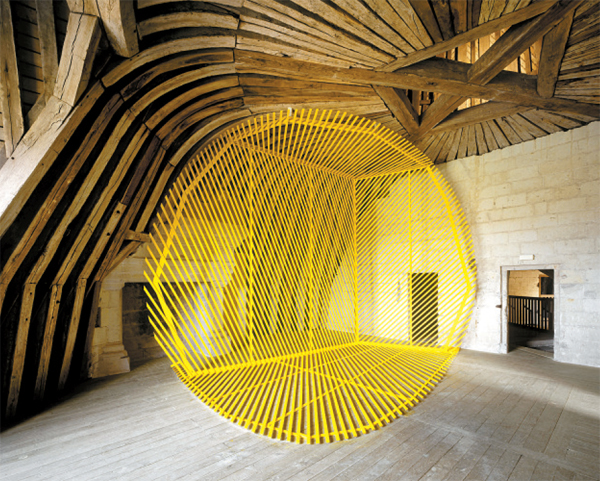 “My work is a kind of calligraphy in three-dimensional spaces; I draw geometrical figures in the air,” he said. “But they can be preserved only in two-dimensional images.”

The artist said he works in the tradition of anamorphosis in Western art. It is an optical trick on which a distorted projection or form, when seen through a special device or from a specific vantage point, becomes a reconstituted image.