Male chauvinism in the kitchen

Male chauvinism in the kitchen 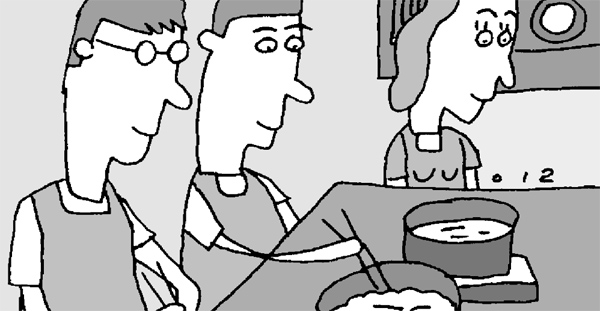 It’s been more than 10 years since I came to Korea. Now I am often told that I have almost become Korean, but there is still one thing that doesn’t make sense to me. I cannot understand who is supposed to do the household chores.

In Korea, I have noticed a culture where not only a full-time housewife, but also a working woman takes full charge of household chores.

Although the situation may be slightly different for the younger generation, I can see that most Korean husbands are not helping their wives. They do not seem to think household duties are also their job. It is a classic example of male chauvinism.

China is different from Korea. My father fed me throughout my childhood. For his 30 years of marriage, he did not ask my mother to do laundry for him. He is actually a better chef than my mother.

During the winter vacation of my freshman year, about 10 friends from my high school gathered at a friend’s house. At the time, all my male friends headed to the kitchen to prepare for lunch. And all the girl friends enjoyed chatting.

Because I was brought up in such a culture, it is hard for me to get used to the male chauvinist culture in Korea. I felt rage, albeit small, toward my Korean husband whenever he sat in front of the TV immediately after putting down his spoon at the dinner table.

China is the birthplace of Confucianism and it was one of the countries that had the most severe influences from Confucianism. The philosophy of Confucius stated that a woman who lacks talent is virtuous and it oppressed women for thousands of years. It deprived women of the right to education and no opportunity was given to women to use their talents.

As we can see from the Confucian moral lessons for women, such as forcing them to obey in turn three men - father, husband and son - and to have four virtues of morality - physical charm, propriety in speech and efficiency in needlework, women became owned by men.

They also faced physical abuse. Foot-binding was just one of them. I remember that my grandmother had feet that were tightly bound when she was a child - to make them small.

If the traditions continued until today, China would probably have become the worst country of male chauvinism in the world. But when the People’s Republic of China was founded in 1949, everything changed - dramatically.

The Chinese Constitution defined women as beings that have equal rights in politics, economy, culture and society and at home to men. Mao Zedong made the famous proclamation that “women hold up half the sky” to encourage women to participate in the society more actively.

In the political arena, women representatives composed 23.4 percent of the National People’s Congress. In last year’s Hurun Report, renowned for its annual “China Rich List,” four out of the top five and seven out of the top 10 wealthiest self-made women were Chinese.

As their abilities were recognized through social activities, women began to express themselves more aggressively. Chinese women no longer rely on men. They have the same status and decision-making power at home. There is no glass ceiling for them regarding promotions at work. Child care facilities are offered satisfactorily so that they can concentrate on work.

It is natural that anyone - whether it is the husband or the wife - who came home first will prepare dinner. Youngsters grow up watching their parents dividing household chores and it is natural for them to follow the practice.

A development of a society cannot be achieved only by men - or only by women. It needs harmonious cooperation and consideration.

In China, there is an old saying that when men and women work together, no task is difficult.

Movements to improve women’s rights are growing strong not only in China, but also other parts of the world. Korean women must have equality at home and work with men.

Korea has its first woman president. It achieved a world-class democracy. Would it be too much for me to hope for a husband who will voluntarily walk into the kitchen and cook our dinner?

*The author is a researcher at the JoongAng Ilbo China Institute.