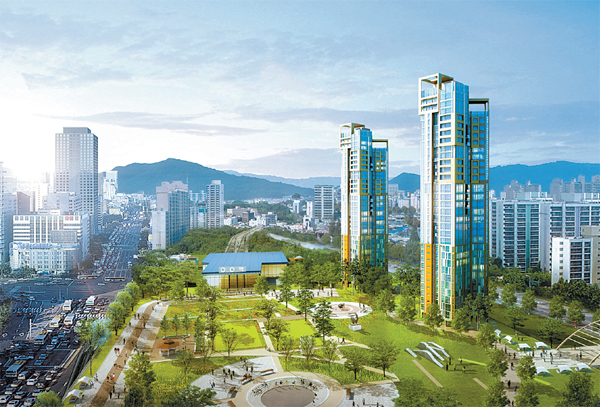 A computer-generated image of what Happy Housing could eventually look like. Provided by the Ministry of Land, Infrastructure and Transport

The Ministry of Land, Infrastructure and Transport has confirmed it will offer 60 percent of newly built public apartments to “social rookies” such as newlyweds or college students by 2017.

The project, which is called “Happy Housing,” was an election pledge by President Park Geun-hye intended to address chronic housing problems. The Land Ministry has been working to come out with a more detailed plan since Park took office and yesterday reported its plans to the president at a cabinet meeting.

The government previously had a housing welfare project called Bogeumjari Housing, but the ministry said the new project is geared toward central city areas. It hopes to supply 200,000 housing units by 2017.

The ministry said that the new concept is to contribute to a city’s sustainable growth and revitalize the cultural environment.

The Happy Housing will be built on state-owned land such as areas reserved for railway properties. The government hasn’t finalized the exact locations.

Under the plan, about 60 percent of the housing units will be offered to newlyweds and college students. If a complex is for newlyweds, the government will put a priority on applicants who are pregnant or far from their parents.

The government said it is also considering giving priority to people with special skills to offer the community. For example, if a musician offers a performance, or researchers offer to give a lecture, they may get priority to move into government housing and even a discount on rental fees.

“Under reasonable considerations, the rents will be cheaper than the market level taking into account renters’ incomes,” the ministry said in a release. “The detailed rent system and other standards will be determined soon.”

Happy Housing areas will be developed as multicomplex residential areas. The ministry plans to attract small business hotels to such areas and even get foreign tourists to stay in them.

To create jobs and boost the economy of the local community, the government plans to attract companies to the complexes while also establishing a job support center. The ministry is also considering incentives to commercial facilities in the complex if they hire local residents. It will also reserve space for traditional markets in the areas.

Since some apartments will be built near railroads, the ministry said it will do its best to minimize noise and vibrations. But accessibility to transport will be good.