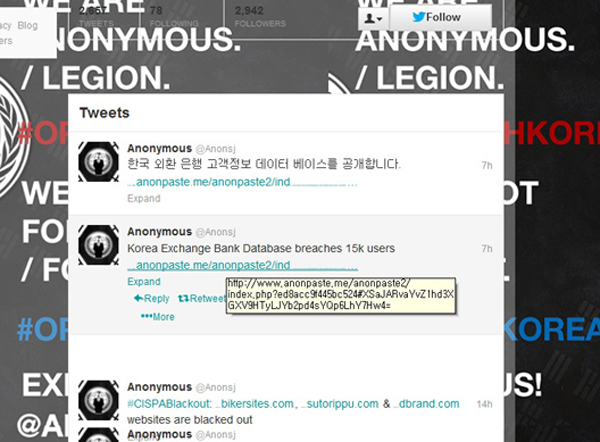 Screen capture shows the Twitter feed of the hacker @Anonsj and links to an alleged list of KEB customers.

A member of Anonymous, a group of international hackers that recently attacked North Korea’s propaganda Web site uriminzokkiri.com, yesterday claimed he hacked the customer database of the Seoul-based Korea Exchange Bank and obtained customers’ personal information. The bank, however, denied the hacking, saying the information disclosed by the hacker doesn’t match information in its database.

Yesterday, a Korean hacker belonging to Anonymous posted a tweet using his Twitter account @Anonsj that he will “unveil the database of KEB’s customer information” and attached a link to pastebin.com that contains a list of 1,460 e-mail addresses and random text and numbers that appear as user IDs and passwords. On top of the list was written “Target: http://www.keb.co.kr/ Korea Exchange Bank.”

Anonymous is the group that hacked North Korea’s propaganda Web site and leaked information about 15,000 registered members of the site on pastebin.com, where hacked information usually is posted.

Several hours after the posted message by Anonymous, KEB released an official statement denying any kind of hacking or hacking attempts involving its customer database.

“After verifying the customer information, including e-mail addresses, that has been posted by the hacker group, we conclude that none of the information matches the information of KEB customers,” the bank stated. “There were also no traces of any hacking attempts on KEB. Our computer network system is processing as usual.”

KEB says it monitors its IT security system around the clock.

Earlier this month, another group called DigitalBoys UG claimed it hacked the database of Hana Bank and extracted bank employees’ names, e-mail addresses and credit card numbers. After verification, however, the claim was found to be untrue, according to the bank.