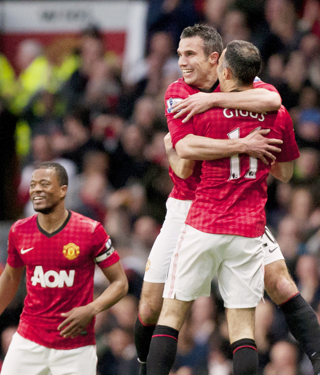 Twenty was the number at Old Trafford on Monday.

United produced a performance of style and swagger to extend its record haul of English league titles to 20, overwhelming Aston Villa, 3-0, to wrap up the championship with four matches to spare and reclaim the trophy from local rival Manchester City.

Van Persie, United’s driving force all season, scored all three goals in a clinical first-half display. Dressed for the occasion - he was wearing the No. 20 shirt.

“It’s a great feeling,” said the Netherlands striker, the top scorer in the league with 24 goals in his first season with United. “It is a fantastic team and fantastic players. It is a championship for every single one of them.”

Alex Ferguson’s decision to sign with Van Persie in the last offseason for ￡24 million ($36 million) - a hefty price for a previously injury-prone player with just a year left on his Arsenal contract ? has turned into a masterstroke.

As Ferguson ambled into the center circle moments after the final whistle to soak up the party atmosphere, he was soon embraced by Van Persie, who left Ferdinand and the rest of his teammates celebrating in front of fans and made a beeline for the Scot.

“I remember [Arsenal manager] Arsene Wenger saying he’s a better player than you think - I think he could be right,” said Ferguson, who secured the 49th trophy of his managerial career.

“In terms of impact, I think it’s as big as any one I can remember.”

With United needing a victory to dethrone City, Van Persie led the charge by scoring the opener after only 83 seconds and then steering in a sublime volley in the 12th minute.

The party had started in earnest by the time he wrapped up his hat trick in the 33rd, giving United an unassailable 16-point lead over City.

“It is sweet, it doesn’t matter when you win it,” Ferguson said. “The consistency has been phenomenal. We have lived up to the expectation.”

After throwing away an eight-point lead with six games to play last season, United was determined to grab the title at the first opportunity this time and there was no danger of a collapse against relegation-threatened Villa.

United’s players celebrated jubilantly in front of all four ends of Old Trafford. The meltdown last year hurt, especially coming at the hands of a fierce rival and in the final minute of the season.

“When you lose it in the manner that we did last year, it’s always special to win it back,” said Ryan Giggs, the United midfielder still going strong at 39. “We did it in style.”

Van Persie’s second goal will rank among the best at Old Trafford in recent years, the Dutchman connecting sweetly from the edge of the area following a perfectly weighted pass from Wayne Rooney. As the net rippled, Van Persie sprinted along the touchline to receive the acclaim of Old Trafford.

“As far as I’m concerned, it’s the goal of the season,” Ferguson said. “Technique, head over the ball. Magnificent strike.”

City manager Roberto Mancini previously acknowledged that Van Persie has been “the difference” between the two teams this season, and each of the three goals must have been painful to watch for the blue half of Manchester.

“That’s why we are champions,” the celebrating United faithful sang midway through the first half, the title in the bag.

The trophy will be presented to United after its last home game of the season, against Swansea on May 12.