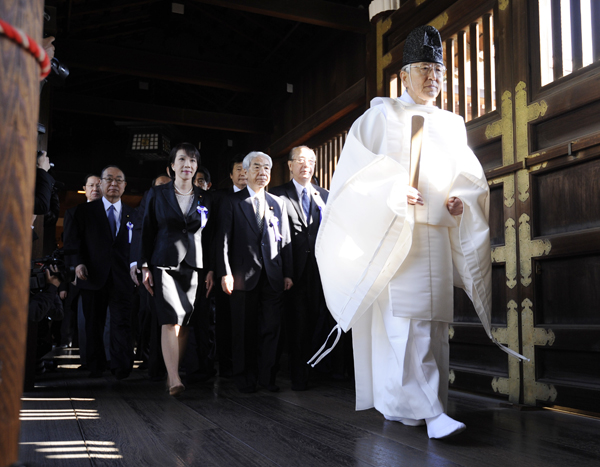 Japanese lawmakers visit the Yasukuni Shrine in Tokyo yesterday. Despite opposition from Korea and China, a group of 169 legislators visited the controversial shrine in Tokyo that honors war criminals from World War II. It was the first time more than 100 government officials visited since October 2005, according to local media. [XINHUA/NEWSIS]

Japanese Prime Minister Shinzo Abe made nationalistic comments that are bound to offend Korea and other Asian countries, apparently denying that Japan invaded neighboring countries before and during World War II.

At a meeting of the Japan’s House of Councillors, or upper house of the Diet, Kazuya Maruyama, a ruling Liberal Democratic Party lawmaker, asked Abe what he thought of the so-called Murayama statement of 1995, in which former Prime Minister Tomiichi Murayama apologized for Japan’s brutal colonial rule of Asian countries, including Korea and China.

The Murayama statement was made on the 50th anniversary of the end of the war in the Pacific and was considered Japan’s official position regardless of which political party was in power.

It read: “During a certain period in the not-too-distant past, Japan, following a mistaken national policy, advanced along the road to war, only to ensnare the Japanese people in a fateful crisis, and through its colonial rule and aggression caused tremendous damage and suffering to the people of many countries, particularly to those of Asian nations.”

In the meeting yesterday, Maruyama commented that some expressions in the statement were ambiguous, such as “the not-too-distant past” and “a mistaken national policy.” Maruyama said the statement “has no historic value.”

Abe agreed with him.

“I want to say that the term ‘invasion’ was not defined internationally or academically,” Abe said. “In a relationship between two countries, it depends on which one defines it.”

Maruyama also said the country “should discuss this issue without putting a taboo on it.”

Abe once again agreed with Maruyama.

“In Japan, if there is any comment in the political arena [about it], it has directly led to a diplomatic dispute,” Abe said. “And then we shut our mouths, even though we know that’s not the right thing to do. I think it’s true that we have made this taboo.”

At another meeting with lawmakers Monday, Abe said he wouldn’t repeat the Murayama statement.

“Fifty years after the war, the Murayama statement was announced, and 60 years after, the Koizumi statement followed,” he said. “In 2015, the 70th anniversary, I will announce a new, future-oriented statement.”

On Aug. 15, 2005, former Prime Minister Junichiro Koizumi had a statement very similar to that of Murayama. When he was campaigning in the general election last year, Abe said he would revise all of the statements by former governments that acknowledged war crimes of Japan. Abe’s comments are bound to further strain relations with Seoul and Beijing and other Asian nations, as is the procession of government officials and lawmakers to the Yasukuni Shrine, which honors Japanese war dead, including Class A war criminals from World War II.

A total of 169 lawmakers of ruling and opposition parties visited the shrine yesterday as part of a three-day spring festival that started Sunday.

The number was unusually large. In the past, only 30 to 80 lawmakers made visits during the spring event.

“We can see anywhere in the world that a lawmaker pays his respects to war dead who fought for the country,” Otsuji said. “I don’t understand very well why [Korea and China] are protesting our actions.”

Deputy Prime Minister Aso said he didn’t expect relations with neighboring countries to suffer because it wasn’t the first such visits by lawmakers.

“It’s not a new thing,” he told reporters yesterday. “I don’t think this will have an impact on diplomacy.”

“The Yasukuni Shrine is a place where the war criminals are enshrined together and a facility to glorify the war,” Cho Tai-young, spokesman of Seoul’s Foreign Ministry, said at a daily briefing yesterday. “The government has a firm position on the matter of history, including the Yasukuni Shrine.”

In response to Abe’s rejection of the Murayama statement, Cho said, “The matter of history is clear. The right thing is right, and the wrong thing is wrong, and they should not be confused.”

“The Chinese government has delivered a strong protest to Japan,” Hua Chunying, spokeswoman of the Chinese Foreign Ministry, said at a daily briefing on Monday.

“The matter of the Yasukuni Shrine is related to whether Japan grasps its history of military invasion correctly or not and whether it can understand the emotion of people in the victimized nations. Japan can develop its friendship with neighboring countries only if it seriously reflects on the history of its past invasion.”