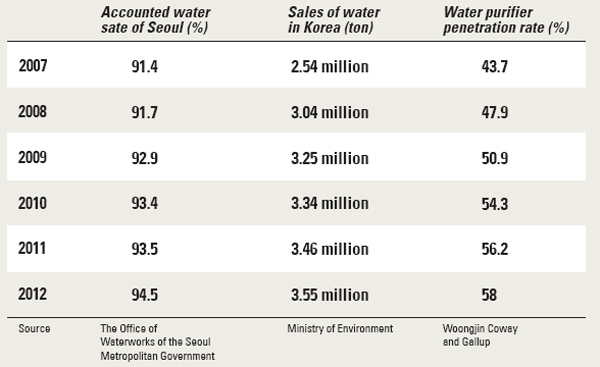 Arisu is the name of the Han River during the Goguryeo Dynasty (37 BC to AD 668), a portmanteau of the old Korean word of “ari,” meaning big, and the Chinese word “su,” meaning water.

According to the Office of Waterworks, a six to seven-hour-long water purification processes takes place once water is collected from the Han River.

The impurities and bacteria from the river water are eliminated before being distributed to houses in Seoul.

The entire purification work is monitored by the Water-Now System, an automated water quality monitoring system installed in 156 places, including water intake stations and water purification plants in Seoul.

Every household in Seoul receives the Arisu water, which is how the government now refers to tap water.

For example, when the purified water leaks while it is transported through water pipes, the accounted water rate decreases.

The city government said the number is greater than other cities in advanced countries, including Los Angeles (94 percent) and Paris (91 percent), but lower than Tokyo (95.8 percent).

“We have continuously replaced old water pipes that transport purified Arisu into houses for years,” a spokesman of the city government said. “We judge that such changes improved the quality of tap water as well.”

Unfortunately, Arisu is not still considered by many to be acceptable drinking water.

When the Office of Waterworks conducted a survey of 2,300 randomly selected citizens, only 4.1 percent of the respondents said they drink Arisu without boiling it first.

According to the study jointly conducted by Woongjin Coway and Gallup, the number of water purifiers at houses in Seoul has increased from 43.7 percent in 2007 to 58 percent last year.

“I believe the city government that the quality of tap water has been improved for years due to the Arisu project, but they must know that the tap water could be polluted when it’s transported into water pipes that are installed in houses, which the city government can’t do anything about,” said Social Environment System Engineering Prof. Kim Hyung-soo from Sungkyunkwan University.