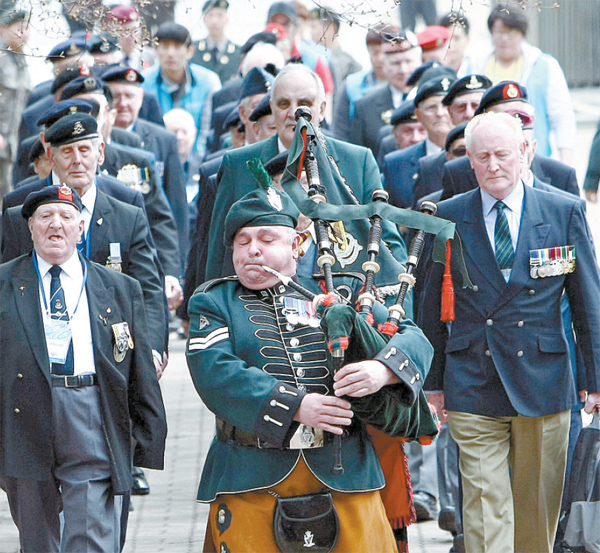 As this year marks the 60th anniversary of the armistice agreement which ended the Korean War, some 100 British and Irish veterans on a week-long revisit program march to the Gloster Valley Battle Monument in Paju, Gyeonggi, yesterday, commemorating the Battle of Imjin River. [NEWSIS]

Commemorating 60 years since the armistice agreement which ended the Korean War (1950-53), some 100 British and Irish war veterans gathered together at Gloster Valley Battle Monument in Paju, Gyeonggi, yesterday.

For many of the veterans who had fought in the very hills, not too far from the 38th parallel dividing the North and South, it was their first time returning to Korea.

These veterans held a ceremony to commemorate the 62nd anniversary of the British 29 Brigade’s actions at the Imjin River in April 22-25, 1951, fending off the Chinese military attack to recapture Seoul. During the war, there were 1,109 British killed and 2,674 wounded.

Denis Talbot, 79, who participated in the 29th Infantry Brigade of the British Army, recalls Korea of 60 years ago.

“Everything was very barren, no roads, deep monsoon trenches, all just dirt. There was nowhere to go outside of the camp.” He recalls always being kept busy though, “cleaning, always cleaning equipment.”

Now, he said, “It’s wonderful what Korea has done - Seoul is beautiful now. At the time of the war, we were only here because our government told us to come here, and many of us asked ourselves, ‘why are we here?’?”

“I think coming back, we realize why we fought, seeing it first hand, and receiving such a warm welcome,” Talbot said, accompanied by his spouse. “We were walking down to the train station, and we saw elderly people lined up and cheering. We wondered who was here, and then realized that they were cheering for us.”

Korean Minister of Patriots and Veteran Affairs Park Sung-choon in his opening remarks at the ceremony expressed his deep gratitude to the veterans on behalf of the Korean government, calling the location “one of fiercest battles that took place in the Korean War.”

“Regretfully, North Korea has ratcheted up tension on the Korean Peninsula another notch by nullifying the agreement of armistice, declaring an all-out war and stopping the Kaesong Industrial Complex,” Park added, stating that Korea “will maintain strong security posture based” and close cooperation with the UN allied nations.

The ceremony was part of a Korea revisit trip sponsored by the Ministry of Patriots and Veterans Affairs of some 300 veterans, spouses and other family members from four Commonwealth countries - England, Canada, Australia and New Zealand.

They arrived in Korea on Monday for a week-long visit. Some 95,000 soldiers from Commonwealth nations fought in the war against North Korea, and about 1,750 lost their lives.

The veterans will also visit the United Nations Memorial Cemetery in Busan, where many of their fallen comrades are buried, tour the demilitarized zone and commemorate major battles.

The group of veterans included 12 Irish veterans - though at the time of the war Ireland was not a UN member state.

On Thursday, a memorial of those of Irish birth or heritage who died in the Korean War will take place at the War Memorial of Korea in Seoul.

The memorial will especially recall the Battle of Happy Valley, Jan. 3 to 4, 1951, in which Allied forces held back the advancing Chinese Army to facilitate the evacuation of Seoul.

Irish Mark Beck McConnell at 89, was the oldest of the 12 Irish veterans present that day. He attended the ceremony in a wheelchair.

As a 24-year-old man originally from Belfast, Northern Ireland, he served in the British Army under the Royal Ulster Rifles, an infantry regiment, and saw many major battles, including at Happy Valley and Imjin River, until he sustained a hip injury in July 1951.

“I had good times at Happy Valley. But it turned out to be an unhappy valley at the end,” recalled McConnell. The Royal Ulster Rifles sustained very significant losses in this battle.

“I had a brother with me and a cousin that got killed. He is buried in Busan. I lost some good friends,” he said.

He said memories are something “you keep mainly to yourself until you come out to an event like this.”

But, he would like to share the legacy. “I had a grandson who would have liked to come with me but he’s only 16. He’s going to come later on through the revisit program because [Korea] will invite grandchildren.”