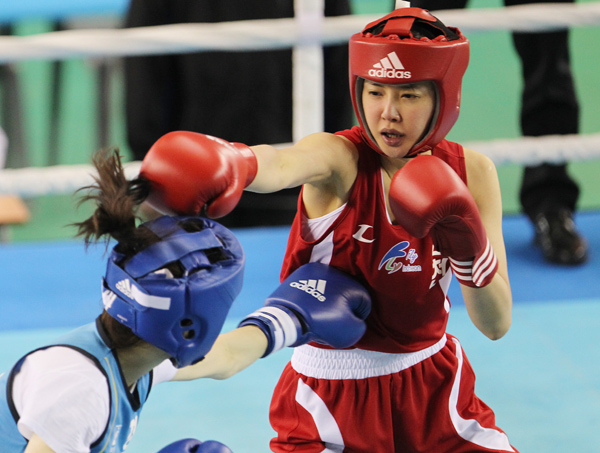 Boxing is no longer a second job for Lee Si-young.

The 31-year-old actress beat 19-year-old Kim Da-som, 22-20, in the final national boxing team qualifying round of the under 48-kilogram class in Chungju, North Chungcheong, yesterday, becoming the first entertainer - male or female - to represent Korea in an international sports event.

“I am really honored,” Lee told a post-match press conference. “I will devote myself for the next eight or nine months to boxing rather than the schedules as an entertainer so that I could compete in the 2014 Asian Games.”

Putting her slender frame in the red uniform at the Chungju Gymnasium, Lee was frequently on the receiving end of ?Kim’s punches midway through, trailing 4-2 in the first round and 9-7 in the second.

But she came out swinging in the third, taking a 16-14 ?lead with her quick, precise left-handed crosses and right-handed jabs, combined with a two-point bonus on Kim’s foul. Kim continued charging in the fourth but missed many ?punches, failing to dent Lee’s two-point lead?.

The victory ?vindicates Lee’s passion for the sport. Despite winning several amateur boxing ?titles ?since picking up the gloves in 2010, many saw her fights as bids to help her ambition as an entertainer. But, she was serious enough to shed 1.5 kilograms (3.3 pounds) during the past three days. “She was so harsh on herself to lose weight,” said Shin Jong-hoon, a men’s national team member who has trained with Lee on the Incheon City boxing team.

Lee Seung-bae, the national boxing team coach who watched the qualifier match on the scene, said that Lee deserves to be a national boxer.

“She has improved a lot from the first qualifier held in Ulsan last year,” the coach said, adding, Lee will “grow faster once she enters the Taeneung National Training Center.”

The national boxing team will begin training Monday at the Seoul training center for the 2014 Asian Games. But, Lee? will not be there.

Lee can represent Korea in the under 48-kilogram class in international competitions this year. However, there are few major events in that class. The annual Korea-Japan boxing exchange event slated for October or November in Japan is one of the few events where Lee will represent Korea this year.

Her dream is to represent the country at the Asian Games to be held in Incheon in September 2014. To that end, she plans to upgrade to the 51-kilogram class as early as the national sports festival in October. She will have to qualify again to be able to represent Korea next year. The first qualifier ?will be held in November.