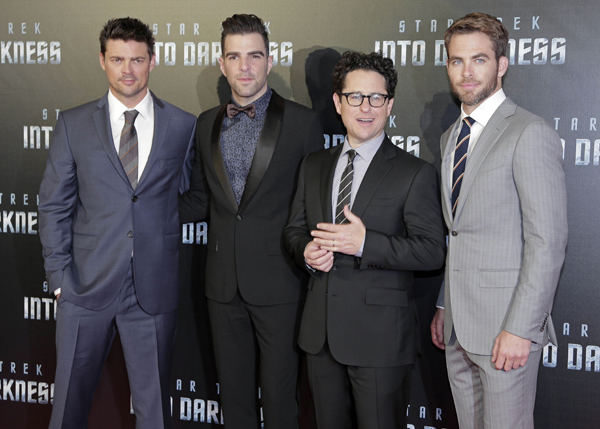 SYDNEY - Hundreds of fans screamed and waved as the cast of “Star Trek: Into Darkness” beamed into Sydney on Tuesday with the crew of the starship Enterprise returning to space in the world premiere of one of the season’s most anticipated movies.

Fans swarmed the red carpet in central Sydney for a glimpse of Chris Pine and co-star Zachary Quinto, who play Captain James T. Kirk and Mr. Spock in the sequel to J.J. Abrams’s highly acclaimed reboot of the famous franchise.

“It’s a lot of fun. I love Kirk,” said Pine, reprising his role as the suave captain in the film, which is due for worldwide release on May 17. “Kirk’s a man of passion who’s ruled by his heart. He’ll go from crying to laughing to yelling to loving, and I just love his passion.”

“Into Darkness” follows the crew of the Enterprise starship as they return to an Earth left in chaos, with Kirk, Spock and the rest of the crew, including Zoe Soldana as Nyota Uhura, setting out to capture those responsible. The classic sci-fi drama, which began almost half a century ago, has spawned six television series and 11 blockbuster films that have racked up more than a $1 billion, according to the Web site Box Office Mojo.

Hundreds of fans lined up for hours in front of a multiscreen cinema in the city center, some carrying DVDs, posters and photos for which they sought autographs. Reuters