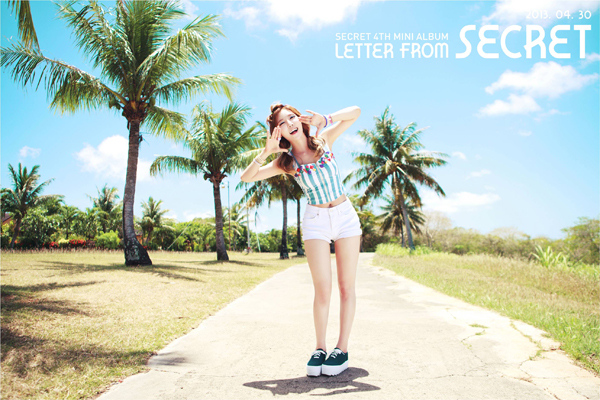 Zinger of Secret said she will use her real name, Jung Ha-na, for her public activities, according to the group’s agency TS Entertainment.

“She said she wanted to start fresh,” said the agency in a release.

“She wrote lyrics for the three songs in the upcoming [EP] of four songs and focused a lot on working on her music.”

The group is coming back with the new EP “Letter from Secret” next Tuesday.

The agency released a photo of Jung with the announcement of the name change. In it, she has her hair tied on both sides and wears a sky blue striped tank top with white pants to hint at the upcoming summer season.

In addition, the group is scheduled to perform at the annual “Dream Concert” on May 11 at World Cup Stadium in northwestern Seoul.

Other big names like SHINee, Infinite, 2AM, Girls’ Generation, Beast and KARA will also appear.