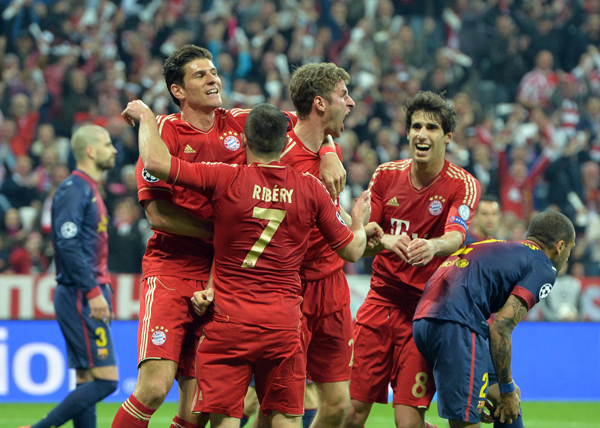 MUNICH - Barcelona, who have changed the face of the game in recent years, were handed a footballing lesson when they were crushed, 4-0, by Bayern Munich in an extraordinary Champions League semi-final first leg on Tuesday.

The Catalans, winners of the trophy in 2009 and 2011, had no answer to Bayern’s power, speed, pressing and resolute defense as they slumped to their heaviest defeat for almost six years and matched their worst result in European competition.

The victory was so comprehensive that the 68,000 fans at the Allianz Arena may have wondered whether they were witnessing the end of an era as the all-conquering visitors were ripped apart in the second half.

Thomas Mueller was the architect, scoring the first and last goals and setting up the second for Mario Gomez as the Bavarians, already crowned Bundesliga champions, continued an astonishing season that could yet yield a treble.

“We played fantastically today,” Bayern Chairman Karl-Heinz Rummenigge said. “I have never experienced a night like this, and I have been around for quite some time.

“I think we all saw Messi was not fully fit. We have a very good chance now of reaching the final.”

World Player of the Year Messi, returning from a hamstring injury, made little impact up front for Barca, while midfield duo Xavi and Andres Iniesta lacked their usual cutting edge.

Some of the gloss was taken off Bayern’s win, however, by doubts over the second and third goals.

Gomez looked marginally offside when he turned in the second after 49 minutes and Barcelona protested that midfielder Mueller blocked Jordi Alba as the defender tried to tackle Arjen Robben before the Dutchman clipped the ball into the corner 24 minutes later.

Two of the goals followed corners, exposing weaknesses in the Barca defense in the absence of the injured Carles Puyol.

“Miracles are very difficult and 4-0 is a very difficult result to turn around,” said Barca’s assistant coach, Jordi Roura, referring to the second leg at the Nou Camp on May 1.

“But our duty is to fight until the end and that is what we will do.”

On a heavily watered pitch, Bayern did not touch the ball for the first minute as the Catalans got the match under way with one of their characteristic passing moves.

Robben had an early shot saved by Victor Valdes following a clever Javi Martinez backheel before Barca enjoyed another long period of possession.

German Cup finalists Bayern then began to look more dangerous and it was no surprise when they went ahead in the 25th minute with the help of an overhit corner by Franck Ribery.

His delivery found Robben on the other side of the penalty area and a rare right-footed cross from the Dutchman fell to defender Dante, who headed the ball on for Mueller to stoop and score.