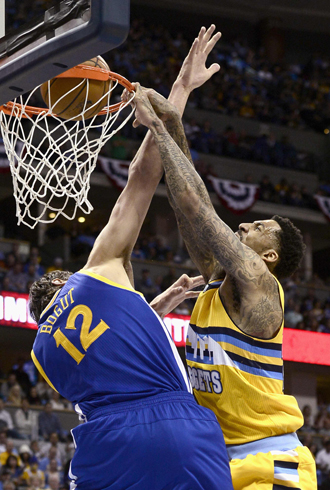 NEW YORK - The New York Knicks are heading to Boston, then perhaps finally back to the second round.

The once-mighty Celtics don’t seem capable of stopping them.

Carmelo Anthony scored 34 points, Sixth Man of the Year J.R. Smith added 19, and New York opened a 2-0 lead over Boston with another dominant second half in an 87-71 victory on Tuesday night.

Raymond Felton added 16 points for the Knicks, who used a 27-4 run spanning halftime to blow it open and move halfway to their first series victory since the 2000 Eastern Conference semifinals. This is their first 2-0 lead since sweeping Toronto in the first round that year.

“For us, we know what type of team we are,” Anthony said. “We know when we really buckle down on the defensive end, it’s been hard for teams.”

It’s been brutally difficult for Boston.

Paul Pierce scored 18 points for the Celtics, who will host Game 3 on Friday in their first home game since the Boston Marathon bombings.

They will have to be much sharper to avoid their first opening-round elimination since 2005, before they became one of the NBA’s power teams again.

“We have to figure out the offensive side of the ball and not be so stagnated,” Boston’s Kevin Garnett said. “Figure out ways to score more often.”

In Denver, Stephen Curry had 30 points and 13 assists and the scrappy Golden State Warriors handed the Denver Nuggets their first loss at home in more than three months, a 131-117 stunner that evened their playoff series at a game each.

Rallying around injured David Lee, who cheered on the bench in street clothes, the Warriors got 26 points from surprise starter Jarrett Jack, a career-high 24 from rookie Harrison Barnes in his debut at power forward and 21 from Klay Thompson.

The sixth-seeded Warriors, who became the second road team to win in the postseason after Chicago’s victory at Brooklyn on Monday, wrested homecourt advantage from the NBA’s best home team in the series that shifts to Oakland for Game 3 on Friday.

“They were knocking down shots,” Denver’s Andre Iguodala said in an understatement

In Miami, Dwyane Wade scored 21 points, LeBron James finished with 19 and the Miami Heat used a frantic start to the fourth quarter to beat the Milwaukee Bucks, 98-86, in Game 2 of the teams’ Eastern Conference first-round series on Tuesday night.

It was 68-65 entering the fourth. With James and four backups on the court, the Heat needed only 2 minutes, 22 seconds to outscore Milwaukee 12-0 and stretch the lead to 80-65 - ensuring the reigning NBA champions would take a 2-0 series lead into Game 3 on Thursday night.

“We held court,” Heat coach Erik Spoelstra said. “We protected it for two games. We did what we’re supposed to do. And that’s it.” AP