GE chooses Korea as a center for offshore biz

GE chooses Korea as a center for offshore biz 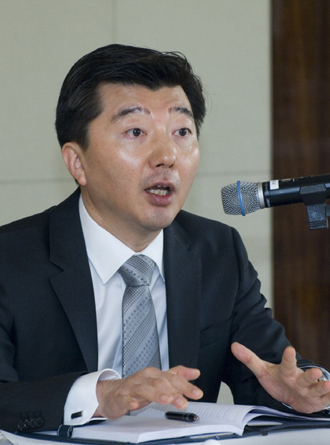 “I have expressed Korea’s strength and growth potential to GE’s top executives including Chairman Jeffery R. Immelt and Vice Chairman John G. Rice after I was appointed to head GE Korea in January 2012,” Kang said at a press conference held to celebrate his first anniversary as CEO yesterday at the Westin Chosun Hotel. “This is significant in that Korea has successfully become a place for GE’s global strategic growth.”

According to GE Korea, this is the second time that GE headquarters set up a business headquarters outside of the United States after a headquarters for mine production in Australia.

According to market watchers, the offshore and marine business in Korea currently employs 130,000 people and exported $40 billion worth of products in 2012.

They forecast GE’s move will be a boon for the local sector.

“Korea was picked as the country to lead GE’s global offshore and marine business after undergoing fierce competition with China, Singapore and Brazil,” Kang said.

“GE’s leadership has accepted GE Korea’s points that Korea is No. 1 in the offshore facilities business in the world and it could also generate synergy by forming partnerships with Korean shipbuilders.”

GE Korea said it will appoint a Korean as chief of the new unit on May 1.

“We haven’t yet set up details such as establishing production lines, forming a joint venture, seeking M&As and building an R&D center,” Kang said. “But all possibilities are open as [GE] is willing go beyond the offshore facility business and expand its horizon to marine resources development, merchant vessels, military installations and shipbuilding.”

Kang said GE headquarters is not concerned about tensions with North Korea.