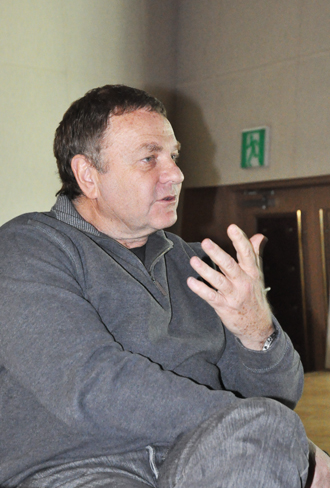 “Without government support, there’s no way you can fly,” Harpaz said in an exclusive interview with the Korea JoongAng Daily.

Since 2006, IMC has been 80 percent owned by American investor Warren Buffet’s Berkshire Hathaway.

Harpaz said IMC’s affiliate Iscar is a good example as it managed to become a world-class tool manufacturer 30 years ago thanks to the Israeli government’s chutzpah initiative and said Park would do well to study the experience of Israel in fostering SMEs.

Harpaz was visiting Korea for a new product launch by Iscar. IMC also owns TaeguTec, the largest cutting tools manufacturer in Asia, which is based in Daegu.

Like Israel, Korea lacks natural resources so it should focus on nurturing skilled workers who can compete with big industrial countries like Japan, Germany and the U.S. by making innovative products, Harpaz added.

“We were completely unknown,” he said. “We built a name from nothing .?.?. And we managed to do this because we have enough skilled people that know how to develop a product. They helped us to make products so innovative that a customer felt it would be a mistake not to adopt the product.”

Currently, less than one percent of Iscar’s products are sold in Israel.

The two-day product launch ended yesterday and was attended by 1,000 engineers from both big and small Korean companies, including Doosan Infracore and Hyundai Wia.

Here are excerpts from an interview with Harpaz:

Q.What are your thoughts about President Park’s creative economy initiative to foster SMEs?

What importance do you place in the South Korean economy?

South Korea is very important. This is a country that ended up doing very well during the crisis of 2008-2009. Korea was the first country that managed to go out of recession very quickly and with a lot of power compared to many other countries. I think Korea learned its lesson back in the 1997 Asian financial crisis. I think they were ready for such a crisis. I can see what happened in 2009 and what’s happening in the world now: We are in a cycle of recession and still Korea hasn’t had a really big drop. It may not be booming, but it’s not dropping like other countries.

What is the secret to TaeguTec and IMC’s growth?

We are a different kind of company even being under the umbrella of Berkshire Hathaway. This means that we manage our company differently. We have a unique business culture that we implemented in all our companies around the world.

I have no different feeling working with Iscar in Israel or Ingersoll in Germany or TaeguTec in Korea because we managed to build a unique business culture.

Using this philosophy, we decided to make a big change in our company here in Korea. We took a very locally oriented company, renamed it TaeguTec and grew it to become a multinational name that everyone respects. Now, companies around the world don’t say that because it’s made in Korea we must pay a low price. On the contrary, we never sell at low prices. In fact, we only sell high technology products for the benefit of the customer. How does the customer benefit? Through better profitability and a competitive advantage.

Why is R&D important?

A major company cannot survive without R&D because there are certain countries out there that are playing with low labor costs and copying product lines, either by copying a patent or going around a patent. So the only way to grow is to invest in R&D. If a company doesn’t invest in R&D a company will disappear. The only way to compete in the market and against neighboring countries is to produce the products faster.

What is your prediction for IMC, Iscar and TaeguTec for next year?

I’d like to see the market coming back to 2011. That was a boom for us. If it’s less than 2011, then I hope the automotive industry will return to normal.

There’s a lot of general engineering that relies on the automotive industries and together they make up almost 70 percent of cutting tool consumption.

So I rely on the automotive companies to continue to invest in new plants. They are investing, they invested in 2010 and 2011, but due to the recession, those investments slowed down.

But as soon as this recession will end, which could be this quarter or the coming quarters, the automotive industry will rebound.

Would threats from North Korea sway any future business plans in South Korea?

I don’t think so, because you can ask me the same question about bird flu in China or what’s going on in the Middle East. You can the same thing about Boston and whether the people in Massachusetts will stop buying cutting tools [after the Boston Marathon bombings].

The world is sometimes crazy but I don’t think it will influence it our business.