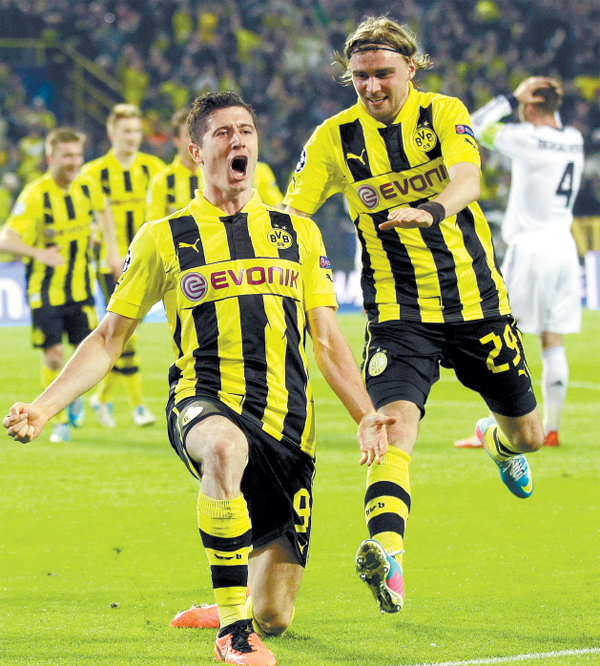 Dortmund’s triumph in the first leg of the semifinal also lined up the prospect of an all-German final at Wembley Stadium on May 25, after Bayern Munich’s 4-0 rout of Barcelona on Tuesday. The second leg matches will be played next week.

Lewandowski opened the scoring in the eighth minute, only for Cristiano Ronaldo to equalize it two minutes before the interval.

But Lewandowski beat the offside trap to claim his second in the 50th, and the Polish striker completed his hat trick in stunning fashion five minutes later. He rounded off the scoring with a penalty in the 67th, after Xabi Alonso brought down Marco Reus.

Dortmund, the only unbeaten side remaining in the competition, made it six wins from six at home and extended Madrid’s run of six consecutive defeats in Germany.

The hosts’ preparations for the game looked to have been disrupted by the news attacking midfielder Mario Goetze’s decision to join Bayern at the end of the season.

But the side showed no ill effects and almost claimed an early the lead when Reus ran at three defenders before forcing a save from Lopez. The rebound fell just beyond ?Lewandowski in front of the open goal.

Lewandowski took his chance a minute later, however, when Ilkay Guendogan sent Goetze free down the left, and the 20-year-old whipped in a dangerous cross that Lewandowski managed to reach ahead of Raphael Varane and Pepe.

Mesut Oezil almost played Ronaldo through as the visitors sought a response, but the pass was too far ahead of the Portugal star.

The visitors’ troubles with Dortmund’s pressing game were summed up when Alonso went back to collect the ball from his goalkeeper, only to put a long pass out over the sideline.

??The game was being played at such a frenetic pace after the break that both sides found it hard to finish passes.

However, Lewandowski ran onto Reus’ defense-splitting pass before tucking the ball past Lopez, and he did even better five minutes later when he eluded Pepe by dragging the ball back and hammered it in from close range.

Only a fingertip save from Diego Lopez denied Guendogan from claiming Dortmund’s fourth in the 62nd, but Lewandowski notched his fourth from the spot five minutes later.