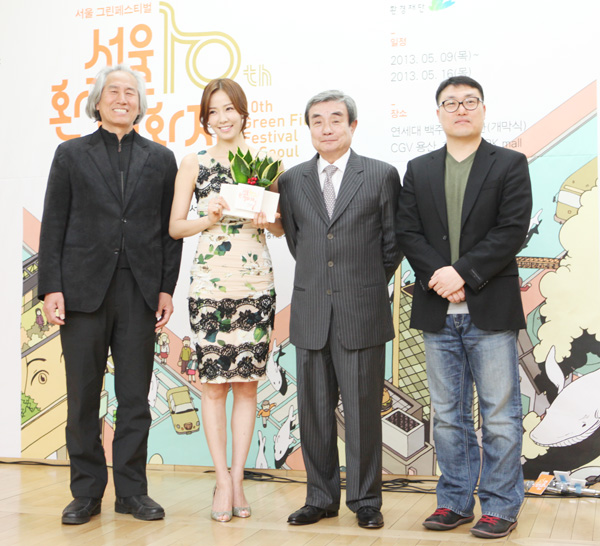 Seoul’s Green Film Festival, which advocates for environmental causes through cinema, is set to hit the 10-year mark with the largest collection of films to date.

Organizers promised a “bigger, fresher” event at a press event last week ahead of the opening on May 9.

Park said that tireless efforts to make a name for festival over the past decade are starting to pay off.

“It is now the biggest environmental film festival in Asia,” he explained, noting that a total of 146 films will be screened over eight days. “We had entries from more than 42 nations around the world and have 21 films in the competing segment.”

The opening film was announced to be “Promised Land,” starring Matt Damon, bringing some glitz to what otherwise may seem like an alternative film event.

Damon and director Gus Van Sant also worked together on “Good Will Hunting” some 15 years ago.

The plot revolves around a salesman for a natural gas company whose life changes when he moves to a town that his corporation wants to take over.

It claimed the main prize at the National Board of Review last year and a Special Mention at the Berlin International Film Festival this year. Despite the Hollywood touch, Park said he hoped “the audience will learn a bit about the environment while being entertained” unlike at other film events that focus just on entertainment.

There are various segments including Korean and international environmental films - both of which offer monetary awards - as well as divisions for climate change, genetically modified food, the aftereffects of Fukushima, animals and children.

“As usual, we pondered over the most pressing matters before deciding on the segments,” Kim said.

And although such issues are not easy to digest, Son said she would work hard with her counterpart, actor Ji Jin-hee, to spread the word on beautifying the world.

Her first project will be developing easy steps that can be used to help save the environment.