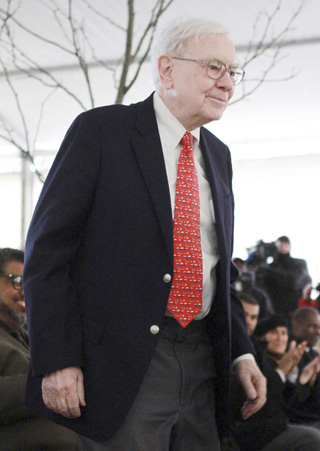 Warren Buffett, who controls the largest stake in Coca-Cola, knows how to steal a show.
The billionaire investor showed up at the soda maker’s annual meeting Wednesday to help sell the company’s message to shareholders in an onstage interview with Chief Executive Officer Muhtar Kent. The surprise appearance drew a standing ovation as Buffett advised Kent to stay ahead of competitors by reviewing what made other businesses falter.

“I like to study failure,” Buffett, 82, said at the meeting held in the Cobb Galleria Center in Atlanta. “We want to see what has caused businesses to go bad, and the biggest thing that kills them is complacency. You want a restlessness, a feeling that somebody’s always after you, but you’re going to stay ahead.”

Berkshire Hathaway, which Buffett has led for more than four decades, owns 400 million Coca-Cola shares after a share split last year, with a value of almost $17 billion. Berkshire, which owns See’s Candies and an equity stake in American Express, favors companies that have loyal customers and can withstand competition, Buffett said.

“I’m the kind of guy that likes to bet on sure things,” Buffett told Kent. “If you take care of a great brand, it’s forever. Those are the kind of businesses I like.”

Buffett reminisced about how as a 7-year-old in Omaha, Nebraska, where Berkshire is based, he would buy and sell bottles of Coke. He joked that the only mistake he made was not putting the nickel he made on each six-pack into Coca-Cola’s stock. He would eventually make up for lost time.
Buffett, who once served on Coke’s board and whose son Howard Buffett is currently a director, spent $1.3 billion on Berkshire’s stake, which was accumulated through the end of 1994. The stake was then valued at about $5.15 billion, Buffett said in a letter to shareholders published in 1995. At yesterday’s meeting, Buffett said he wouldn’t think of selling a share.

Kent asked Buffett about operating a multinational business amid wealth transfers in the global economy and the “volatile environment” that “leaves a lot of uncertainty.”
“You basically have to be accepted in countries around the world and bring them something that makes their lives better,” Buffett said. “If you can do it at a popular price, you can go to the masses of the world and say you’re going to live better because I’m going to be here ? and then behave that way you’ve got a winning formula.”
Buffett has been busy internationally himself, looking for investments in Asia in recent years. He visited Korea, Japan and India in 2011, and China in 2010.
International Dairy Queen, a Berkshire subsidiary known for its ice-cream desserts, opened in Trinidad and Tobago in December. The unit started its 500th store in China last year and has more than 270 outlets in Thailand.

Lubrizol, the chemical maker Berkshire acquired in 2011, is building a manufacturing plant in China while Berkshire units related to aircraft including NetJets and FlightSafety International also have bolstered their presence in Asia.

Kent, who is also Coca-Cola’s chairman, pushed last year for the Atlanta-based company’s 11th stock split with an appeal for greater market liquidity. The decision diverged from Buffett’s tactic at Berkshire, where he has resisted splitting the company’s Class A shares.