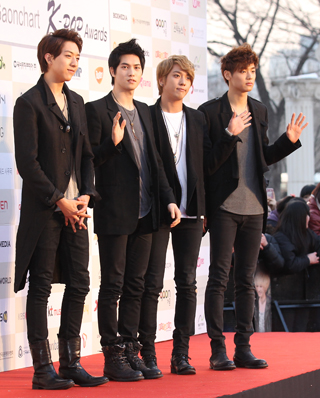 The title song “Blind Love” contained in the EP of the same name was written and composed by one of the members, Lee Jong-hyun.

The song expresses a man’s struggle as he misses his ex-girlfriend. A total of three songs were put in the newest EP, including “With Your Eyes” and “Greedy Man.”

To show fans how they have prepared for the upcoming EP, the group put music videos and a DVD of behind-the-scenes recordings in a limited-edition EP.

CN Blue plans to travel to five cities in Japan - Nagoya, Fukuoka, Tokyo, Osaka and Hokkaido. A total of 10 concerts there will start on July 24 in Hokkaido. Prior to the release of the group’s new EP, members invited 100 fans who had downloaded their new song “Blind Love” to an exclusive event.