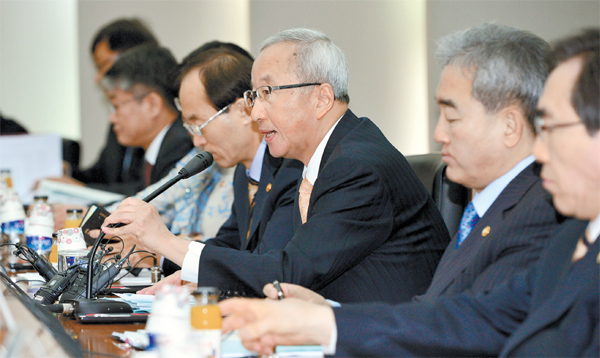 Whether or not the Korean economy is starting to recover has become a major question as the central bank and Ministry of Strategy and Finance maintain sharply contrasting views.

According to the Bank of Korea yesterday, GDP rose 0.9 percent in the first three months of the year, the highest quarter-on-quarter growth since a 1.3 percent rate from January through March 2011.

The growth exceeded BOK Governor Kim Choong-soo’s forecast of 0.8 percent two weeks ago and about twice the government’s prediction of 0.4 percent to 0.5 percent.

“It is difficult to affirm that the second quarter will be immediately better off, but the central bank’s previous outlook was that the economy would improve throughout the year,” said Kim Young-bae, general director of economic statistics at BOK. “If the government frontloads more spending in the second quarter, that would help the construction market, contributing to the overall economy’s stabilization.”

The higher-than-expected growth was mainly led by a 3 percent increase in facility investment and 2.5 percent in construction investment. Domestic income also inched up by 1 percent.

“The trend could continue in the following quarter because another new town, Wirye, will start selling apartments,” Kim said. “The government also is planning to make additional SOC [social overhead capital] investment in the second quarter, so we can be positive.” 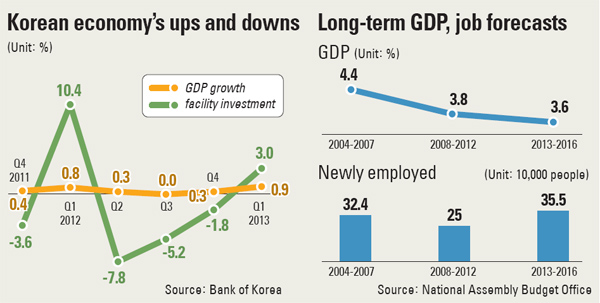 The expansion in facility investment was largely in the semiconductor and display sectors, according to the bank’s analysis. However, compared to a year earlier the amount plunged 11.5 percent, remaining below expectations.

Since growth was slightly higher than it expected, the BOK is less likely to consider cutting the benchmark interest rate, despite the government’s strong will to stimulate the economy.

“We shouldn’t make the public consider zero-point-something percent growth too low,” said BOK Governor Kim. “For the past year, the monetary policy has been very flexible, but for the time being, the current stance of the central bank will be maintained.”

However, growth of less than a percent still means the economy is far from recovering.

It was the eighth consecutive quarter of sub-1 percent growth. The Korean economy has never before experienced such a long slowdown.

An official at the Finance Ministry said the Q1 growth can’t be interpreted as a sign of recovery.

“The Q1 growth looks better because of too-low growth in the third and fourth quarters,” the official said. “Private consumption, which slid 0.3 percent, remains sluggish.”

Deputy Prime Minister Hyun Oh-seok said at a ministerial meeting yesterday the Korean economy would collapse if the government’s proposed supplementary budget is not swiftly executed.

“The country’s growth engine could be turned off, if action is not taken now,” Hyun said. “We were desperate when we made the supplementary budget and property plan. A foreign report recently pointed out that the Korean economy is seeing a stalled miracle due to jobless growth, a low fertility rate and an aging society.”

Despite the deputy prime minister’s call for immediate action, the National Assembly has yet to pass the supplementary budget.

The National Assembly Budget Office yesterday released an analysis of the 19.3 trillion won supplemental budget which contained five arguments why the government’s plan would be less effective than claimed.

According to the report, the Finance Ministry overestimated the amount of the shortfall in tax revenue and allocated the budget for questionable projects.

Meanwhile, the budget office has sided with the Finance Ministry on the question of recovery. In an earlier report, the office said the country’s long-term growth forecast is gradually declining, due to sluggish exports, private consumption and facility investment.