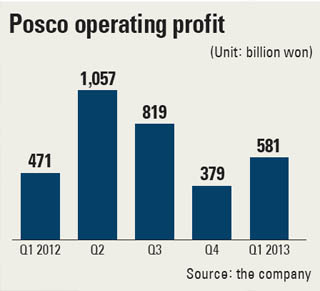 In a regulatory filing released yesterday, the steelmaker posted a net profit of 383 billion won ($344 million) in the three months ended March 31.

That compares with 538.6 billion won a year earlier and analysts’ estimates of 505.5 billion compiled by Bloomberg.

But the steelmaker said it raised 581 billion won in operating profit, up from 23.4 percent year-on-year as it managed to save a combined 137.8 billion won from cost-cutting efforts.

And Posco said sales to appliance markets rose 6.3 percent in the first quarter compared to a year before.

“We anticipate the global demand for steel to gradually improve starting from the second quarter,” a Posco official said yesterday. “The rationale behind this is that we estimate China’s steel consumption demand will rise 3.5 percent this year compared to a year ago thanks to government stimulus measures and rising consumer sentiment. The steel demand in emerging countries including India and Southeast Asia is likely to see a 6 percent increase compared to last year, thanks to expanded investment affected by quantitative easing measures.”

Posco cut its group sales forecast for this year by 3 percent to 64 trillion won. The company and its global peers are coping with declining profits as China’s economic slowdown and the European debt crisis reduce demand for the alloy used in cars, ships and buildings.

“The steelmaker could see gains starting in the second quarter as it is likely to enjoy price hikes of certain metal products,” said Eom Jin-seok, an analyst at Kyobo Securities. “But the growth ratio is likely to be limited compared to a year ago.”

“We hardly see any catalyst to boost demand this year,” said Park Byung-chil, an analyst with IBK Securities. “On the supply side, there won’t be much improvement in this region, with China still pumping up output. While Posco will try to increase prices to reflect cost gains, it won’t be easy.”

Meanwhile, the stock price of the steelmaker, the third-largest in terms of market capitalization in the blue chip Kospi market, jumped 0.94 percent to close at 322,500 won before the earnings announcement. The company released its earnings after the stock market closed.