By-election wake is choppy for DUP

By-election wake is choppy for DUP 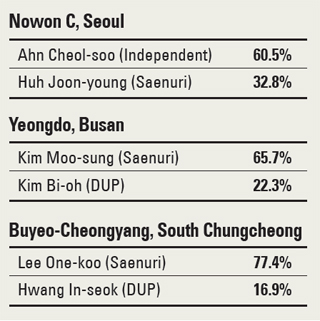 As the conservative ruling party celebrated its by-election victories, the largest liberal opposition party yesterday said it was dedicated to restoring its popularity while also bracing itself for turbulence in the wake of the political arrival of liberal darling Ahn Cheol-soo.

Public sentiment appeared to have changed little since the December presidential election, as the Saenuri Party scored victories in most areas except for Nowon C District, Seoul, where the independent Ahn won easily.

Opposition parties gained no seat. The Democratic United Party has 127 lawmakers, and the Unified Progressive Party and Progressive Justice Party each have six.

“The outcome of the three legislative races is a message by the voters that they support the Park Geun-hye government and the ruling party, but at the same time, they want us to stay on our toes,” Representative Lee Sang-il, Saenuri spokesman, said.

“In Nowon C, voters chose an independent candidate with high popularity,” Lee said, adding that Ahn’s victory will be a prod to the Park government and the ruling party to put more efforts into political reform.

The landslide victories of political heavyweights Kim Moo-sung and Lee One-koo are expected to bring about significant change in the power structure of the ruling party. Kim, a close associate of President Park, will enter the National Assembly to serve his fifth term, and Lee, a former South Chungcheong governor, will join the legislature as a third-term lawmaker.

Speculation grew quickly that Kim will make a bid to become the Saenuri Party’s new chairman, but Kim yesterday denied the possibility. “The tenure of the current party chairman should be respected,” Kim said.

Hwang Woo-yea, the current chairman, is to serve the post until May 2014, but insiders said the ruling party will likely hold a leadership election earlier to better prepare for June 2014 local elections.

While denying his ambition to control the party, Kim made clear yesterday that he will actively pursue a role linking the party and the Blue House.

He also said yesterday in an interview with CBS that he wanted to face Ahn in Busan. “I was confident that I could beat him,” Kim said.

Ahn, after his failed presidential bid last year, went into brief self-exile in the United States but made a grand return by running in the by-election. He chose to run in Nowon C of Seoul, although many said he should have run in Busan and challenged Kim to prove his political power.

The DUP’s crushing defeat was particularly shocking because the Saenuri Party undertook a political experiment by not fielding any candidates in local races. The DUP fielded a total of six, including legislative seats in Busan and South Chungcheong and two county head races in Gapyeong of Gyeonggi and Hamyang of North Gyeongsang.

As promised during the presidential campaign, the Saenuri didn’t field candidates in the county head races. Multiple Saenuri members ran as independents, splitting the conservative votes, but still beat their DUP rivals.

The largest opposition party could not hide its wounded pride.

On the night of the by-election, the DUP did not even conduct a situation room in its headquarters, indicating that it had practically given up on the races.

After its defeat materialized, the DUP issued a short statement saying it accepts the people’s judgment with humility.

Representative Park Ki-choon, floor leader of the DUP, said yesterday that every one of the 127 lawmakers accepted responsibility.

The DUP also expressed its fear over Ahn’s impact. Speculations were high that Ahn will create his own political party, but Ahn said he needed time to think about his next move.

“We must escape from the business-as-usual politics of ideological debates and factional strife,” Park said. “We must never let the people down with a schism among liberals. The DUP must reform, and we will rebound through the May 4 national convention.”

The party has been struggling to recover from its presidential defeat, and the Democrats will elect their new chairman at a convention next month.

“We hope the liberal realignment to be caused by Ahn’s win will bring about the expansion and unity of the liberals, not the creation of a split,” Park Yong-jin, the DUP spokesman, also said.

The party’s crushing defeat and Ahn’s arrival, however, will inevitably influence its May 4 leadership election. While Kim Han-gill, the frontrunner, has repeatedly said the DUP must recruit Ahn, contenders Kang Gi-jung and Lee Yong-sup disagreed.

Kang and Lee also agreed yesterday that they will form an electoral alliance and decide by Sunday which of them will run against Kim.